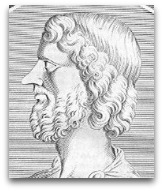 Quotes | On
The following are quotes on Aristippus:

“Epicurus, according to various hostile writers, passed off as his own views of Democritus on atoms and Aristippus on pleasure.”

“Every pleasure is a good, every pain is an evil; but we are not on that account to pursue after every pleasure and to flee from every pain. Peace of soul and freedom from pain are the only lasting pleasures, and these are therefore the true aim of existence. On this point Epicurus diverges sharply from Aristippus, who placed pleasure in motion, and declared the individual pleasure to be the true object. Epicurus was opposed to Aristippus, from whom he had learnt so much, in teaching that intellectual pleasure was higher, and to be preferred to physical pleasure; for the mind is stimulated not only by the present, but also by the past and the future.”

References
1. Lange, Friedrich A. (1875). The History of Materialism: and Criticism of its Present Importance, Volume 1: Materialism in Antiquity. The Period of Transition (translator: Ernst Thomas). The Seventeenth Century (translator: Ernest Thomas) (pgs 102-03). Houghton, Osgood, and Co, 1879.