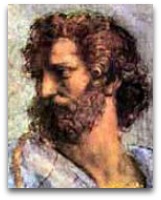 Natural | Unnatural
Aristotle, in his Physics and On the Heavens, described the motions of projectiles as being partly natural and partly unnatural: natural motion, as for all heavy bodies, is downward, toward the center of things, and its unnatural motion is imparted by air whose motion can be traced to whatever started the motion. [17] He seems to have taken this as a fundamental principle to which he applied to all phenomena, such as fire rising, money making, and so on.

Aristotle, in his Physics (2:8), states the following on natural things: [18]

“Natural things are exactly those things which do move continuously, in virtue of the principle inherent in themselves, towards a determined goal; and the final development which results from any one such principle is not identical for any two species, nor yet is it any random result but in each there is always a tendency towards an identical result if nothing interferes.”

Fire
The following is Aristotle’s views on fire: [6]

“For any two portions of fire, small or great, will exhibit the same ratio of solid to void; but the upward movement of the greater is quicker than that of the less, just as the downward movement of a mass of gold or lead, or any other body endowed with weight, is quicker in proportion to its size.”

Aristotle was the first to document the Mpemba effect, which he attempted to explain using a theory called 'antiperstasis'. [7]

Life
Aristotle’s conception of the origin of life, according to Alexander Oparin (1936), is presented principally in his: On the Parts of Animals, On the Movements of Animals, On the Origin of Animals, and On Plants, employing a mixture of four element theory, entelechy, animal heat, and spontaneous generation.

Existence
Aristotle stated the following about existence of place: [15]

“A natural scientist must have the same kind of understanding of place as he does of infinity—that is, he should know whether or not it exists, in what sense it exists, and what it is—because the idea that existing things exist somewhere is universally accepted. I mean, that which does not exist is nowhere. Where, for example is a goat-stag or sphinx? Also, the most common and most fundamental kind of change is change of place, which is known as movement.”

Universe
Aristotle, in his The World (De Mundo), described the world to his pupil Alexander the Great as follows: [16]

“It is a joining together of the sky [Nut] and earth [Geb] and of the elements [four elements] contained there in.”

Money making
In his Politics, Aristotle comments on the relative naturalness or unnaturalness of money-making: [13]

“Of the two sorts of money-making, one is a part of household management, the other retail trade, the former necessary and honorable, the latter a kind of exchange which is justly censured, for it is unnatural, and a mode by which men gain from one another. The most hated sort, and with the greatest reason, is usury, which makes a gain out of money itself, and not from the natural use of it. For money was intended to be used in exchange, but not to increase at interest. And this term usury, which means the birth of money from money, is applied to the breeding of money because the offspring resembles the parent. Wherefore of all modes of making money, that is the most unnatural.”

Collected works
The collected works of Aristotle, originally published as a series of scrolls, where each scrolls is considered a book, was published as 12-volume set by Oxford University Press between 1912 and 1954, which comprises 2,512 total pages according to the 1984 Revised Oxford Translation two-volume set, which have further been divided categorically via Bekker numbers. [11]

Motion
Aristotle's thesis, in regards to motion, is that "nothing moves itself". [8]

Vacuums
In the nature abhors a vacuum debate, Aristotle firstly believed that atmosphere had weight, according to which as air became less dense it would be possible to move faster through the atmosphere. Based on this first belief, in an complete vacuum, a moving object would encounter no resistance, and infinite speed would be possible, but “infinite speed” he deemed impossible, hence a vacuum would be impossible, which he declared in his the famous dictum horror vacui. His usage of the term "void", such as in describing two differing portions of heat, as above, of note indicates that he employed a moderate notion of the void or partial vacuum, or something along these lines.

Animal heat
In his c.350BC De Generatione Animalium, Aristotle postulated that the mode of animal reproduction is determined by a “vital heat” of the animal. The warmer an animal is, Aristotle reasoned, the more perfect will be the state in which its young are generated. [2] Live young are produced by the hotter animals; colder ones produce eggs; the coldest of all, such as insects, produce a larva which in turn produces an egg. [3]

Elements
Aristotle argued that there are four elements out of which all is made: earth, air, water, fire. Each of the four earthly elements has its natural place; the earth at the center of the universe, then water, then air, then fire. When they are out of their natural place they have natural motion, requiring no external cause, which is towards that place; so bodies sink in water, air bubbles rise up, rain falls, flame rises in air. [4]

See main: Aristotle on the soul

On the soul, Aristotle, supposedly, had the following to say: (Ѻ)

“Happiness is the settling of the soul in its most appropriate spot.”

Education
Aristotle, who was the son of Nicomachus, the physician to Amyntas, father of Philip, king of Macedon, was orphaned at a “tender age” and then brought up by a tutor named Proxenus. [21] Aristotle later became a student of Plato.

Students
Aristotle tutored Alexander the Great, who by age of thirty, he had created one of the largest empires in ancient history; established the Library of Alexandria, unified Greek philosophical science with Egyptian theology to form Christianity.

Quotes | On
The following are quotes on Aristotle:

“Aristotle is regarded as the most eminent of philosophers.”

— Otto Guericke (1672), The System of the World: According to the More Common Philosophical Theories [16]

“Aristotle, the greatest philosopher of his time, who was named the ‘genius of nature’ because of his great mind, when he was accused of having bad opinions of the gods, was forced to retire to the Chalcis where he died at the age of sixty-six.”

“Aristotle was the great thinker who was the first to analyze so many forms, whether of thought, society or nature.”

Quotes | By
The following are quotes by Aristotle: [9]

“Nothing natural occurs by chance.”

“Plato is my friend, but truth my greater friend.”

— Aristotle (c.322 BC), Publication; quote was inscribed into Isaac Newton's age 19 written notebook Philosophical Questions a set of forty-five queries into a foundation for a new philosophy.

“The worst form of inequality is to try to make unequal things equal.”

— Aristotle (c.322 BC), Publication; compare Pareto: “The assertion that men are objectively equal is so absurd that it does not even merit being refuted.” [19]

“All men by desire to know. An indication of this is the delight we take in our senses; for even apart from their usefulness they are loved for themselves; and above all others the sense of sight. For not only with a view to action, but even when we are not going to do anything, we prefer seeing, one might say, to everything else. The reason is that this, most of all the senses, makes us know and brings to light many differences between things.”

“The aim of art is to represent not the outward appearance of things, but their inward significance.”

“There is only one way to avoid criticism: do nothing, say nothing, and be nothing.”

“At first, he who invented any ‘art’ that went beyond the common perceptions of man, was naturally admired by men, not only because there was something useful in the inventions, but because he was thought wise and superior to the rest. But as more arts were invented, and some were directed to the necessities of life, others to its recreation, the inventors of the latter were always regarded as wiser than the inventors of the former, because there branches of knowledge did not aim at utility. Hence, when all such inventions were already established, the sciences which do not aim at giving pleasure or at the necessities of life, were discovered, and first in the places where men first began to have leisure. This is why the ‘mathematical’ arts were founded in Egypt; for there the priestly caste was allowed to be at leisure.”