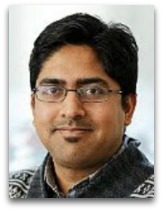 In hmolscience, Arnab Chatterjee (1976-) (CR:14) is an Indian complex systems and physics of society, via statistical physics, researcher, part of the Indian school of econophysics (aka "Kolkata school" according to Victor Yakovenko), noted for []

Overview
In 2003, Indian physicist Bikas Chakrabarti co-authored “Money in Gas-Like Markets: Gibbs and Pareto Laws” with Arnab Chatterjee and S.S. Manna, wherein they considered ideal-gas models of trading markets, where each agent is identified with a gas molecule and each trading as an elastic or money-conserving (two-body) collision. Unlike in the ideal gas, they introduce a quantity the “saving propensity” $λ of agents, such that each agent saves a fraction $λ of its money and trades with the rest. They show that steady-state money or wealth distribution in a market is Gibbs-like for relation $λ = 0, has a non-vanishing most-probable value for $λ ≠ 0, and Pareto-like when $λ is widely distributed among the agents. They compare these results with observations on wealth distributions of various countries. [1]

In 2006, Chatterjee was one of the editors of Econophysics and Sociophysics: Trends and Perspectives, along with Bikas Chakrabarti and Anirban Chakraborti, where Jurgen Mimkes’ noted thermodynamics chapters are found. [2]

In 2016, Chatterjee is an editor (Ѻ) of the, supposedly, upcoming Cambridge University Press book series Physics of Society: Econophysics and Sociophysics (Ѻ), along with Bikas Chakrabarti, Mauro Gallegati, Alan Kirman, and Eugene Stanley.

Religion
Chatterjee, when queries by Thims (2016) about his views on religion in respect to social physics, stated that he has written very little on this topic, his §VII B of his “Socio-Economic Inequalities: a Statistical Physics Perspective” (2014) aside. [4]