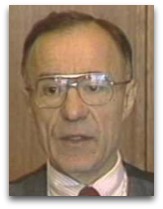 In science, Arno Penzias (1933-) (RGM:578|1,350+) is a German-born American physicist, noted for his 1964 co-discovery, working with Robert Wilson at Bell Labs, of cosmic microwave background radiation, the first evidence of a big bang universe.

Religion
Penzias is a conservative Jew, who believes in the existence of god, but says he constantly wrestles with this existence; believes that the Jews were the chosen people; that Moses was real; the following are few example quotes:

“The best data we have are exactly what I would have predicted had I nothing to go on but the first five books of Moses, the Psalms and the Bible as a whole.”

“Religion is that which we know beyond what we can prove.”

“The thing I wrestle with at all times is the reality of god.”

“ I think the word ‘god’ is meaningful in that I would like to believe in a purposeful world. Purpose implies an ‘owner’ of that purpose and I think that god is the owner of the purpose of the world. By looking at the creation one can infer purpose. Nature, blind nature, is driven by chance, by the laws of probability which revolve around what one would call the second law of thermodynamics. For example, if you were to put a pinch of salt in one part of a boiling kettle of soup, sooner or later that salt would end up dispersed throughout. In other words, it would reach the most disordered possible state. Nature, through random chance, seeks disorder. Life, on the other hand, somehow works against that; it organizes, makes things orderly. If we go out and we see a forest of trees and all of a sudden the trees are plated in a row of equal spaces, we would see purpose. Order implies purpose. Once we look at the purpose, we can, then, go one step further, and say something about the engine of that purpose and the owner of that purpose. If there are a bunch of fruit trees, one can say that whoever created these fruit trees wanted some apples. In other words, by looking at the order in the world, we can infer purpose and from purpose we begin to get some knowledge of the creator, the planner of all this. This is, then, how I look at god. I look at god through the works of god’s hands and from those works imply intentions. From these intentions, I receive an impression of the almighty.”

— Arno Penzias (1994), response to question about the meaning of the world ‘god’, to him, as a concept or mathematical formula [3]

Penzias believes, in short, that the evidence of order in the universe implies purpose, which in turn points to someone who creates it, therefore god, in Penzias’ view, is the “owner” of the world’s purpose.