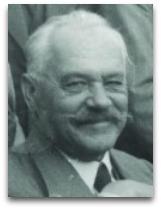 In existographies, Arnold Sommerfeld (1868-1951) (IQ:175|#279) was a German theoretical physicist note for several famous quotations loosely connected to the manuscript Thermodynamics and Statistical Mechanics he was working on at the time of his death. [1]

Overview
As the story goes, in the late 1940s, Sommerfeld had previously written a series of books in physics: mechanics (1943), electrodynamics (1948), optics (1950), etc., and was asked why he had never written a book on thermodynamics? The following is his humorous and frequently quoted answer: [2]

In an odd twist of fate to this quote, in April of 1951, while in the midst of writing a book on thermodynamics (Thermodynamics and Statistical Mechanics), and having been nominated 81 times for the Nobel Prize (more than any other physicist), but not yet having won, Sommerfeld was killed from injuries after a traffic accident while walking his grandchildren. The book was published posthumously the following year. [3] The following is another noted quote from his thermodynamics book: [4]

“Reversible processes are not, in fact, processes at all, they are sequences of states of equilibrium. The processes which we encounter in real life are always irreversible.”