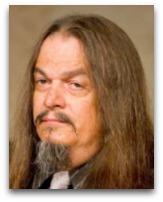 Aron-Ra | Namesake
In 2016, Nelson, in his Foundational Falsehoods of Creationism, stated the following about his Internet name: [1]

“My surname is no terrible secret, but it isn't my preference either. When I signed up for the Usenet group TalkOrigins.com [e.g. “You Are an Ape” (2003) (Ѻ)] I needed a handle and quickly decided on Aron-Ra. Why? I wanted to give a nod to Amen-Ra (see: Amen-Ra) a composite of the Egyptian air god [Amen] and sun god [Ra], also known as Amun-Re, whom I see as a template for the god of Western monotheism.”

Quotes
The following are quotes by Nelson: