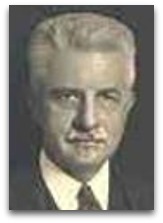 In existographies, Arthur Lovejoy (1873-1962) (CR:27) was German-born American philosopher noted for his 1932-1933 William James lecture series at Harvard turned 1936 book The Great Chain of Being: a Study of the History of an Idea, wherein he gives the first historical account of the "great chain of being" theory, and how, though once the apex of the renaissance, supposedly, it fell off following Rene Descartes’ dualism supposition, i.e. the division of a person into soul-mind and mechanistic material body, which thus separated intellectuals into two cultures, and thereby broke up the great chain of being, by the combined influence, according to Peter Stanlis, of romantic idealism, Darwin’s evolution theory, and Einstein’s relativity. [1]

Quotes | By
The following are quotes by Lovejoy:

“No doubt man’s quest of intelligibility in nature and in himself, and of the kinds of emotional satisfaction which are conditioned by a sense of intelligibility, often, like the caged rat's quest of food, has found no end, in wandering mazes lost.”

“I proposed the term ‘retrotensive method’, which seems to be a needed addition to the philosophical vocabulary, at the Sixth International Congress of Philosophy (1927).”