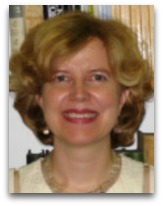 In human chemistry, Astrida Orle Tantillo (c.1963-) is an American Germanic studies professor, science philosopher, and eighteenth-century literature theorist noted for her articles, books, invited talks, and conference participation on the analysis of the science and philosophy of the works of German polymath Johann Goethe, particularly his 1809 novella Elective Affinities. [1]

Overview
In 2000, Tantillo, in her “Polarity and Productivity in Goethe’s Wahlverwandtschaften” , examines Goethe's human chemical theory in terms of the family structure, according to each character’s perspective: Eduard being interested in the separation or of ‘divorcing’ the elements; Charlotte in their marriage; and the Captain in their freedom of movement. She concludes that each viewpoint of the chemical theory, in what she calls a “formulaic reduction that applies the laws of chemistry to human beings”, is completely true for the characters that express it. [5]

In 2001, Tantillo published Goethe’s Elective Affinities and the Critics, wherein she elaborates on the following:

“From the time of its publication to today, Goethe’s novel Elective Affinities has aroused a storm of interpretive confusion. Readers have fiercely debated the role of the chemical theory of elective affinities presented in the novel. Some argue that it suggests a philosophy rooted in fate. Other maintain it is about free choice. Others still believe that that the chemical theory is merely a structural device that allows the author to foreshadow events in the novel and bears no relevance to the greater issues in the novel.”

Tantillo gives an exhaustive account of nearly every opinion, critique, fan, or detractor of Goethe’s Affinities over the last two-hundred years, including the chemical theory views of those such as German science historian Jeremy Adler, Hans Reiss, Kevin Yee, among others. [2]

In 2002, Tantillo, in her The Will to Create: Goethe’s Philosophy of Nature, centers again on the philosophical implications of Goethe’s Affinities, but with specific focus on four aspects of Goethe’s philosophy: (a) polarity, (b) intensification, (c) compensation and finality, and (d) competition, reproduction, and gender. [3]