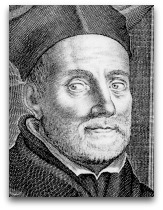 In existographies, Athanasius Kircher (1602-1680) (IQ:180|#186) [RGM:366|1,500+] (CR:30), aka "Incredible German" (Germanus Incredibilis), was German theologian, Egyptologist, physicist, philosopher, and general polymath, a fabled last persons to know everything, noted for his 1667 The Nature of the Magnetic Universe: with Psychological Discussions, wherein he outlined a magnetic cosmology, according to which magnetism governed the movements of everything, animate to inanimate, plants, animals, and planets. [1]

In British historian Robert Irwin's 2006 For Lust of Knowing, Kircher is called "one of the last scholars aspiring to know everything", who, along with his contemporary countryman Gottfried Leibniz, is cited as the probable "last" such scholar. At least two books have been written on Kircher’s universal genius status. [2]

Guericke
In 1651 to 1652, Kircher was in touch with Otto Guericke, e.g. in this period Guericke’s son, supposedly, conveyed his greetings to Kircher in person during his travels. [3]

In 1656, Gaspar Schott, in his Mechanica Hydraulico-Pneumatica (pgs. 356-60), appended letters he had written to Kircher about Guericke’s vacuum experiments. (Ѻ)

Vacuum | Experiments
In 1641, Kircher, supposedly, was present at the Gasparo Berti test (see: Berti vacuum experiment) of the "nature abhors a vacuum" experiment.

In c.1656, Kircher was sent summaries of Otto Guericke's vacuum experiments and asked for comment:

“These and many other considerations are adduced on both sides of this question. Melchior Cornaeus (Ѻ), professor of theology at our own university of Wurzburg, has learned and at some length argued these matters in a discussion of his own dedicated to this topic. On several occasions he and I observed and carefully scrutinized the experiments in question. When I first saw them, I sent an account to Kircher at Rome and to some other friends and scholars, asking their opinion of them. All of them sided with the Aristotelians against the ‘vacuists’. Among the replies I received was this from Kircher.”

“I hate seen the account of the experiments sent to my assistant priest and hate read through it carefully. I am astonished by what it going on in the minds of such people that emboldens them to assert that a vacuum has been produced when the very experiments themselves demonstrate abundantly that there isn't a vacuum. The experiments, while they certainly exhibit the presence of great forces, are very far from showing that a vacuum exists and, on the contrary, then can be no better demonstration that a vacuum doesn't exist.

For if a vacuum is produced by this experiment, what, I ask, is the source of the need for such great exertion? It is certainly not the air, for that has all been extracted. Therefore, it must be the ‘nothingness’ that is left behind after the extraction of the air. Can anyone conceive that nothingness can offer a resistance? Has anyone ever heard of such a thing in philosophy?

The philosophical explanation would be that the small amount of air left behind in the opening, creates the resistance because of the supreme impulse it has to fill the vacuum. But as everybody knows, were the continuity of substance to be once ruptured (which, in my opinion, cannot be achieved by any human undertaking) so little air would have neither the potency to fill the space, nor indeed the impulse. The resistance seen and nature's impulse to oppose are better attributed to the rarefaction of air than to anything else. I have seen this kind of thing a hundred times in similar machines. I am in accord with the considerations you bring up and they clearly demonstrate the truth about the non-existence of a vacuum.

I regret that I do not have enough time for a thoroughgoing refutation from first principles of the claims made on behalf of this whole contraption. Therefore, I shall leave the discussion of this issue to your reverence and to Father Cornaeus. Your reverence might be able to do this most opportunely in the Hydraulica when it treats of the vacuum. By the way, my associate, Fr. Valentine Stanfel, sends you his regards. He is also particularly expert in hydrostatics and had decided to publish similar material to that which you are now in the process of doing. As you have anticipated him, he has abandoned his plan. In the meantime, he will not be short of other topics to engage him among the great range of disputed issues. Your reverence should not neglect to correspond with hint; for that would be beneficial to you both.”

Here, as we see, Kircher incorrectly denies the existence of the vacuum, per what seem to be Aristotelian convoluted verbal arguments about nothingness.

Magnetic cosmology
Kircher, supposedly, was led into his studies on magnetism, upon being impressed by William Gilbert's 1600 On Magnetism. [1]

Kircher’s magnetic cosmology was a precursory stepping stone, so to speak, to the later 1687-1718 gravitation/chemical affinity forces divide cosmology of Isaac Newton.

Quotes | On
The following are quotes on Kircher:

“Nothing is more beautiful than to know all.”