In hmolscience, attack reaction refers to []

Overview
In 1934, Heini Hediger, in his “On the Biology and Psychology of Flight in Animals”, was speaking about “flight reactions” and “critical reactions” of big cats. [1]

In 1955, Hediger, in his The Psychology of Animals in Zoos and Circuses, described these as such: [2]

“According to the definition, ‘flight reaction’ occurs in every wild animal, or in an animal adapted to captivity, whenever man approaches to within the characteristic flight distance of that animal. In addition to this fundamental possibility of driving the new wild animal away to any desired point by releasing its flight reaction, the tamer has another basic possibility, of drawing the animal towards him from any point by releasing its so-called ‘critical reaction’. This occurs whenever the man approaches a wild animal (or one accustomed to captivity), which is prevented from escape, to a distance less than its characteristic ‘critical distance’. In the case of the big cats, this distance plays an exceedingly important part, is fixed, and may be determined to within centimeters. The critical reaction consists of a change from flight to attack, never with the character of an active offensive, but always of a defensive, emergency nature.”

This was photo diagramed by Hediger as shown adjacent, shown with a 1966 sketch of this so-called “attack reaction” by Edward Hall. [2]

In 2003, Raddai Raikhlin, in his Civil War, Terrorism, and Gangs, was employing a Hall model in his work. [3]

In 2007, Libb Thims, in his Human Chemistry, was employing the Hediger-Hall attack reaction model as such: [4]

In 2019, Thims, in the "war" article, was employing the attack reaction as follows: 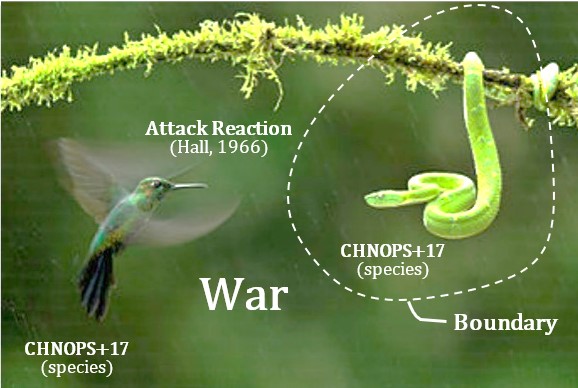