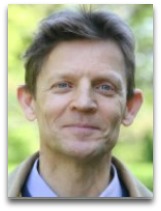 In existographies, Attila Grandpierre (c.1950-) (CR:3) is a Hungarian astrophysicist noted, in human thermodynamics, for his 2004 claim that he was the first person to calculate the entropy of a human, i.e. solve the Bridgman paradox.

Overview
In 2004, Grandpierre, in his “Entropy and Information of Human Organisms and the Nature of Life”, claimed that he was the first to calculate the entropy content of a human being (human entropy); following is his humorous abstract: [1]

“We determine for the first time the entropy content of human beings. The energy contained in the radiation within the human body is utilized to decrease its entropy. Therefore, not in itself but in its effect, the entropy of radiation in vivo may be regarded as negative. Calculating the negentropy of radiation in vivo and the entropy of materials, we found that the sum entropy of the human organism is effectively negative. This result does not contradict any law of thermodynamics since environment is not involved, and reflects the experience that human beings are able to control their behavior.”

Grandpierre’s general research program, judging by his publications, seems to be the determination of the place and action of the human being in the structure of the universe.

In 2007, Grandpierre, together with co-author Katalin Martinas, penned “Thermodynamic Measure for Nonequilibrium Processes”, wherein they attempted to use the “extropy” concept to for formulate a new second law for non-equilibrium conditions, biological or otherwise.

On 2008, Grandpierre, in his “Biological Extension of the Action Principle: Endpoint Determination beyond the Quantum Level and the Ultimate Physical Roots of Consciousness”, employed a mixture of photon arguments and the principle of least action to theorize about biology and consciousness in terms of some type of hued teleology logic. [2]

Education
Grandpierre completed his undergraduate degree in physics-astrophysics in 1974 at Eotvos Lorand University, his doctorate in 1977, and his candidate of physical sciences in 1984. He became a research scientist at the Konkoly Oberservatory of the Hungarian Academy of Sciences in 1990, where he currently works. He was a teacher in the King Nagy Lajos Private University, Miskolc from 1997 to 2002.