Overview
The following is an artistic rendition of Atum, in the form of a man or god man appearing standing on the top of the primordial land mound, aka keme, that rises out of the primordial waters, aka Nun, the tip of which is called the benben or benben stone: 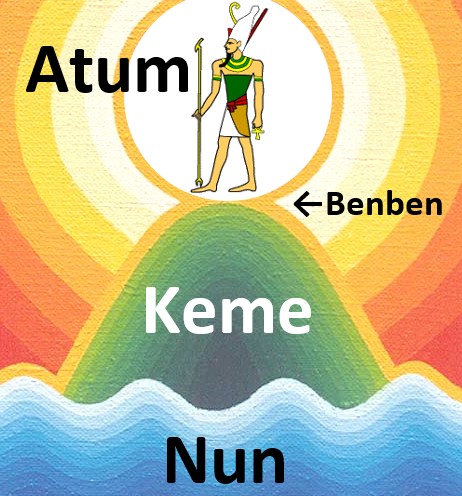 The following are various anthropomorphic images of Atum: 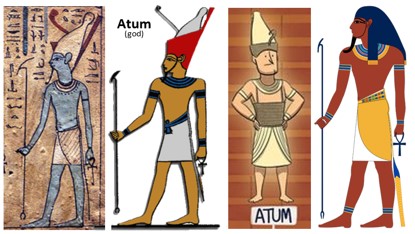 Hinduism
In Hindu mythology, aka Hinduism, Atum became the character "Atman", a description of which is as follows:

“In the beginning, the world was nothing but the Atman, in the form of a man. It looked around and saw nothing different to itself. Then it cried out once, It is I.' That is how the word 'I' came to be. That is why even at the present day, if any one is called, he answers, 'It is I,' and then recalls his other name, the one he bears."

In 1954, George James, in his Stolen Legacy, a book which argues that Greek philosophy originated in ancient Egypt, Memphite theology (see: Memphis creation myth) specifically, suggested that the Greek term “atom” is based on the name of the Egyptian god Atum. [8] Others such as Martin Bernal (1987) and Anthony Preus (1993) and others have published views forwarding this argument. [9]

Religio-mythology | Decoding
In c.1769, Immanuel Kant, according to Ernst Haeckel (1899), compared Adam and Abraham with Adimo and Brahma, and argued that Joseph was equivalent to Ganesha. [6]

In c.1770, Voltaire, in his Philosophical Dictionary, Volume Three, connected the Hebrew Adam to the Hindu Adimo as follows: [5]

“It may be remarked, that this is the first time the name of Adam occurs in the book of Genesis. The first man, according to the ancient Brachmans, who were prodigiously anterior to the Jews, was called Adimo, a son of the earth, and his wife Procris, life. This, is recorded in the. Veidam, in the history of the second formation of the world. Adam and Eve expressed perfectly the same meanings in the Phoenician language.”

In 1907, Gerald Massey, in his Ancient Egypt: Light of the Modern World, Volume Two, connects Atum to Adam as follows: [7]

“In the Hebrew legend it is the woman Eve who offers the fruit of the tree of knowledge. In other versions, especially the Greek, the fruit is offered to the man by a serpent in the tree. Now the serpent was another type of the Great Mother, Kep, who was earlier than the serpent-woman, Rannut; and whether portrayed in the shape of a serpent or in the human form, she was the primordial giver of fruit from the tree. The serpent, the crocodile or dragon, the hippopotamus, the sow, the cow, the lioness and woman all meet as one in Kep, the earliest mother of life. The primal mother in the Kamite representation was the bringer-forth of Sut [Set] and Horus as her first two children, who were born twins. These, as the powers of darkness and light, or drought and fertility, were a pair of combatants who fought for the supremacy until one brother slew the other. This is one of those primary legends that became universal, but NOT because it had a hundred different origins at different times.”

Here, of note, we see Massey correctly disabusing the multiple origins theory, e.g. the commonly held belief that reason multiple religions and cultures each have a flood myth, is because there was a universal flood over the entire earth, and they each, independently, derived their own unique mythology, therefrom. Correctly, universal myths are “dependent”, i.e. dependent on Nile River cosmology, as Massey aptly puts things.

Massey, to continue, then discusses how, whereas in 3500BC, in the first dynasty Egypt, Horus and Set were the two chief gods, Horus being paramount, but that in:

“Sut [Set] and Horus were indefinitely earlier than the solar Atum. But in the cult of Atum-Ra at On or Annu [Heliopolis] they were fathered on him and continued as his sons.”

“Sut and Horus offer an instructive instance of evolution in mythology. They were born sons of the first Great Mother as two of the primordial powers, the twin powers of darkness and light. But in the re-cast of their theology the priests of Annu brought them on as the warring sons of Atum-Ra, who fought each other ‘up and down the garden’ until, as here related, one of them was slain. In various inscriptions, Sut and Horus are called the sons of Atum (Renouf, Hib. Lectures, p. 84).”

Here, to pause, we see how this universal mythos was transliterated, in Nordic mythology, into the story of the battles between the brothers Loki [Set] and Thor [Horus], who were the sons of Odin [Atum]. Next, Massey touches on how, in the Memphis creation myth (2800BC), Horus and Set, as the constituent powers of Atum, were recast as the sons of Ptah, the new state god of Memphis:

“Otherwise stated, they became two of the associate gods, the constituent parts and powers of Atum, as the sons of Ptah and members of the Put company of the Ali.”

Next, Massey connects Atum to Adam as follows:

“The battle in Amenta was not only fought betwixt the Apap [Apep] of darkness and the sun-god Ra. When the two brothers Sut and Horus were repeated in the solar mythos, as the sons of Atum, the conflict was continued for possession of the garden [Garden of Eden]. This was now the motive of the warfare. Previously it was for the water of the inundation or light in the moon. Now it was for the water and the tree of life in the Aarru-garden. In one version of the mythos, Sut is the murderer of the good brother as Osiris. In the other, Sut [Set] pierces and puts out the eye of Horus. This is represented as the contest between Cain and Abel, the two sons of Adam, in the book of Genesis.”

Here, of note, we see the origin of the Nordic mythology (Ѻ) rescript of this “Set piercing the eye of Horus”, i.e. a story meant to explain the astronomical phenomenon of the full moon turning to new moon, in the rescript of how both the father Odin and the son Thor loose their eye, respectively, in battle: 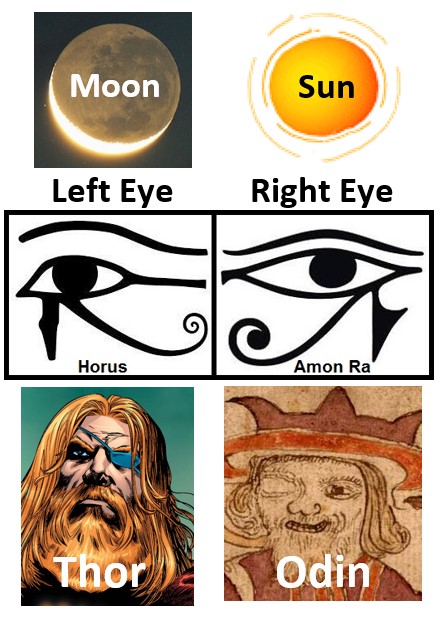 “Sut and Horus represented two contending nature-powers. They fought each other as the two rehus or lions in the light and dark halves of the moon, with Taht as the adjudicator of the landmarks. They also fought as two dragons, or as the crocodile of water and the dragon of drought, both of which were rightly represented in the astronomical mythology. "Hydra" remains for all time as the ‘hellish Apap’ who drank up the water. And ‘Draconis’ is a figure of the good dragon or Horus-crocodile. Lastly, the two opponent powers were portrayed as twin-brothers, fighting for the birth-right, or seeking to overcome each other. Thus, they contended for possession of the garden in Amenta, where they fought upon the mount of glory or were constellated as the Gemini contending in the zodiac.”

Massey, then jumps to the Jewish recension of this as follows:

“The conflict of the brothers was continued in the garden of Eden, and Cain fulfils the character of the murderer Sut [Set], the slayer of his brother. There is an attempt even to discriminate betwixt the two domains of Sut and Horus, when it is said that Abel was a ‘keeper of sheep’, but Cain was a ‘tiller of the ground’ (Gen. 4:2-3).”

“The Aarru-garden, or paradise, planted in Amenta by Ptah for Atum his son, was founded on food and liquid, that is on the water, and the tree, or plant, as food of life. These, in the Hebrew version, are called "the trees in the midst of the garden," and "the river that went out of Eden to water the garden." They represent the mythical tree and the water of life, which had their beginning in actual food and drink, and were afterwards repeated, on earth, in heaven, and in the making of Amenta. The well or water-spring that was the source of life to primitive man was here continued as a basis for the re-beginning of life in the earth of eternity.”

In the Nordic recension, aka Nordic mythology version, as depicted in the recent film Thor: Ragnarok, we see reference to this water spring of life, under the garden of Asgard.
-
Quotes
The following are related quotes:
-

“Atum’s myth is well developed already in the Pyramid Texts. In the midst of the watery abyss of indeterminacy, personified as Nun, Atum creates for himself a point of determinacy, a mound that rises from the waters at the site of Heliopolis, a moment which is also functionally identical to that in which Atum grasps his phallus in his hand. The determinacy of place which comes with the emergence of solid ground in the Nun is one with the determinacy achieved by a part of the body (the phallus) which expresses Atum’s self-awareness. The place of the primordial hillock, which embodies the beginning of everything and was represented at Heliopolis by the presence of a benben stone, or pyramidion, is also a place which is everywhere. This moment of the emergence of the primeval mound is also hardly to be distinguished from the first sunrise, which is in turn each day’s sunrise. From here begins the close identification of Atum and Re. The compound name Re-Atum is very common, either with separate determiners indicating that the two are kept distinct even in fusion (e.g. in Coffin Text spell 673) or with Re subordinated to Atum, as in Coffin Text spell 266, where the operator says “I am Atum in his name of Re.” Where one is to be subordinated to the other, it is Re who is subordinated to Atum, for the sun can be regarded as merely one element in the self-developing totality. Alternately, the sun itself, Re in the broadest sense, can be the focus, relativizing Re in the narrow sense and Atum alike, as in Book of Dead spell 15A: “Hail to thee, Re at his rising, Atum at thy setting.”