In religio-mythology, Atum-Ra, or “Ra-Tem” (Budge, 1904), a syncretism of the gods Atum, the primordial land mound, aka benben, and Ra, the sun god, was the supreme god of Heliopolis, during the old kingdom (2700-2200BC), particularly in the 5th and 6th dynasty (2500-2200BC), when the great pyramids were built, generally depicted as the sun born out of the tip of a mound or pyramid.

Overview
The following is a depiction of Atum, either as the first land mound, or a man-like god standing on the first land mound, called benben, which he summoned up out of the watery abyss Nun, out of which Ra the sun god comes forth; jointly synretized as Atum-Ra in the 5th dynasty (2500BC):

The following is an artistic depiction of the gods Ra and Atum, with their backs facing each other, therein symbolic of their new joint god fusion or syncretism: 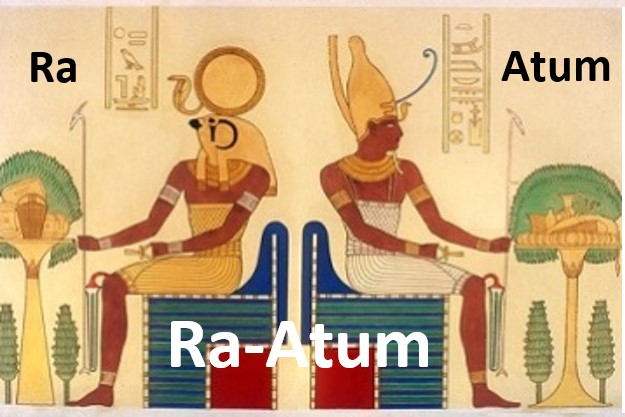 “The phoenix of Ra was that whereby Atum came into being in chaos, in the abyss, in darkness and in gloom.”

“When the priests of Ra attained to the great power which they enjoyed at Heliopolis under the Vth and VIth Dynasties they did not suppress the local god Tem (Atum), but they associated their god with him, and produced the compound god Ra-Tem (Atum).”

“So Atum created a little mound of dry earth to stand on, and this was the beginning of the world. This bit of dry earth, the primeval hillock [benben], is represented in old Egyptian writings by the hieroglyph which represents the sun [Ra] on the little mound at the moment of that first time.”


“Although the exact experiential moment when Atum became identified with the sun god Ra can no longer be determined, it already was standard practice in the old kingdom [2700-2200BC] to refer to these polar manifestations together as a single ‘Atum-Ra’.”