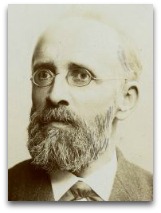 In thermodynamics, August Horstmann (1842-1929) was a German chemist, of the Berlin school, a residual student of Hermann Helmholtz, notable for his 1969 paper "Vapor Pressure and Heated Evaporation of Ammonium Chloride" the first publication in chemical thermodynamics, in which he applied the second law of thermodynamics to the study of equilibriums in chemical systems. [1] German chemist Fritz Haber, in 1908, gave an excellent summary of Horstmann’s contribution to science: [2]

“[While it was] Clausius [who first] called attention to the general applicability of the theory of heat to chemical reactions … we have Horstmann to thank for the fundamental advance from this incidental observation to a fruitful thermodynamic treatment of chemical problems.”

Specifically, in 1869, he was the first to apply the newly formed concept of entropy (1865) to chemistry, that of a study of the sublimation of ammonium chloride, NH4Cl, where he showed that the process followed the same laws as those involved in vaporization of a liquid; hence the Clausius-Clapeyron equation could be applied. [8]

American chemistry historian William Jensen has done a notable amount of commentary on the early chemical thermodynamics work of Horstmann.

Overview
In 1868, in order to ascertain molecular weights via a vapor density method, Horstmann began to investigate the effect of temperature on the equilibrium constant for a dissociation process, beginning with the Clausius-Clapeyron equation, but extending it to apply to a substance that is dissociating. In 1872-73, Horstmann applied the entropy principle to the problems of chemical dissociation. [5] In October 1873, Horstmann announced the condition for chemical equilibrium to be that of maximum entropy. [6] Horstmann’s equilibrium statement, to note, is similar to American engineer Willard Gibbs who, independently, in December of the same year, in a footnote, stated that the condition for thermodynamic equilibrium in a chemical system at constant temperature and pressure is that a certain function, now universally known as the thermodynamic potential, should be a minimum. [7]

Horstmann continued to lecture well into 1899 on three specific topics: “Thermochemistry considerations for the Mechanical Theory of Heat”, “Physical and Theoretical Chemistry”, and on the latest developments in theoretical chemistry (in particular dissociation, physical theories of solutions, and reaction rate from the viewpoint of the conservation of energy). [4]

Education
Horstmann was educated at University of Heidelberg, completing his PhD in 1865, thereafter becoming a professor of theoretical chemistry. [3] After receiving his doctorate degree, Horstmann studied mathematics, reading current chemical and physical problems and visited the lectures of Hermann Helmholtz. He then moved on to the mechanical theory of heat, going to Zurich, where the new science of thermodynamics was being developed by German physicist Rudolf Clausius. [4]