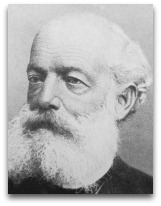 Chemical structure
In 1857, Kekule announced the tetravalence of carbon.

In May 1858, Kekule had built on the idea of tetravalence and the ability of carbon atoms to link to each other, therein becoming, supposedly, the principle formulator of theory of chemical structure.

Benzene
In 1859, Kekule, in his lectures, as has been presumed (Palmer, 2010), was drawing elements and molecules with elongated figures of which the lengths were made proportional to their “affinity units”, as he referred to them, i.e. valences or bonds, in a modern sense: 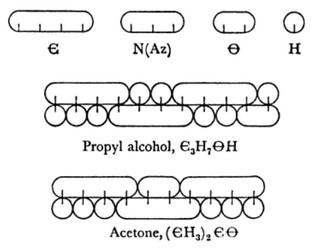 In 1865, Kekule, in his “On the Constitution of Aromatic Substances”, he summarized these views, and published the ring structure for benzene: 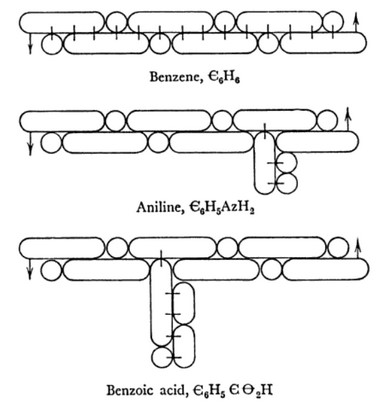 which he later said he dreamed by a snake (see: Ouroboros) circling around and biting its tail:

Quotes | On
The following are quotes on Kekule:

“Man's observations of natural phenomena have fascinated him throughout the recorded history and have provided him a base for development of theoretical ideas. He has sought similarities occurring in two different systems, the social and the natural, and has attempted to derive corollaries in support of his theories. The interpretation of the atomic structure in terms of the solar system by Bohr the structure of benzene as a ring on the basis of a model of a snake with its tail in the mouth postulated by Kekule and the determination of density by the loss of weight of a body on its immersion in water, attempted by Archimedes are some such examples where the latter set of observations were superimposed on the former system to arrive at an acceptable solution of complex phenomena. The book New Dimensions in Sociology, A Physico-Chemical Approach to Human Behaviour by Mirza Beg is a new approach in which he has tried to establish an interface between physico-chemical and social sciences. It makes an interesting reading and provides a basis to quite a few socialization processes like assimilation, migration, mind-body split, etc.”

“By the mid-1800s, the new science of chemistry was developing rapidly and chemists had begun to probe the forces holding compounds together. In 1858, August Kekule and Archibald Couper independently proposed that, in all organic compounds, carbon is tetravalent—it always forms four bonds when it joins other elements to form stable compounds. Furthermore, said Kekule, carbon atoms can bond to one another to form extended chains of linked atoms. In 1865, Kekule provided another major advance when he suggested that carbon chains can double back on themselves to form rings of atoms.”

Quotes | By
The following are quotes by Kekule: