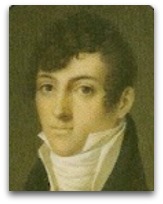 In biographies, August von Goethe (1789-1830) was the son of German polymath Johann Goethe, the only one of the five children, of the paring of Christiane Vulpius (1765-1816) and Goethe, to reach adulthood, who was notably present at their 19 October 1806 wedding (see: Goethe timeline), and, as it has tentatively been argued, the embodiment of many of the regrettable aspects of the Otto child in Goethe’s 1809 Elective Affinities (see: Goethe’s affinity table).

It may be that some aspects of Ottilie von Goethe may have fused into the character of "Ottilie" of Goethe's 1809 Elective Affinities, although this is only speculation, at the moment (fact check).

End
August, towards his end, was said to have turned to alcohol, which may have played a role in his early death on a trip to Rome, age 40, in 1830; an Italian trip which seems to echo that made by both his father and grandfather, at about the same age.