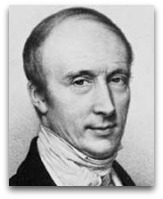 Quotes | On
The following are quotes on Cauchy:

“Roger Boscovich (1711-1787), published a detailed exposition of the views attacked by Buffon and defended by Alexis Clairaut, and, inspired alike by the opinions of Newton and Leibniz, he conceived a cosmology in which the universe is composed solely of material points, these being attracted to each other in pairs. When these points are separated by a sensible distance, their attraction is reduced to mere universal attraction, whereas when they are in very close proximity it assumes a dominant importance. Boscovich's cosmology provided physical theory with a program which the geometricians of the eighteenth century, and of a great portion of the nineteenth, labored assiduously to carry out. The efforts of Johann Segner (1704-1777), and subsequently of Thomas Young, again drew attention to capillary phenomena, and with the assistance of the hypothesis of molecular attraction, as also of Clairaut's method, Laplace advanced in 1806 and 1807 an admirable theory, which Carl Gauss improved in 1829. Being a thoroughly-convinced partisan of Boscovich's monological doctrine, Laplace communicated his convictions to numerous geometricians, who surrendered to the ascendency of his genius; we shall only mention Claude Navier (1785-1836), Simeon Poisson, and Augustin Cauchy. In developing the consequences of the hypothesis of molecular attraction, Navier, Poisson, and Cauchy succeeded in building up the theory of the equilibrium and small motions of elastic bodies, one of the finest and most fruitful theories of modern physics. The discredit into which the progress of present-day thermodynamics has brought Boscovich's cosmology has, however, affected scarcely anything of what Laplace, Gauss, Navier, Poisson, Cauchy, and many others have deduced from the principles of this cosmology. The theories which they established have always been readily justified with the assistance of new methods, the way of bringing about this justification having been indicated by Cauchy himself and George Green. After Pierre Macquer, many chemists used the hypothesis of molecular attraction in an attempt to disentangle the laws of reaction which they studied, and among these scientists we may mention Torbern Bergman, and above all Claude Berthollet. When the latter published his “Statique chimique" in 1803, he believed that the science of chemical equilibria, subject at last to Newton's method, had found its true direction; however, it was not to enter upon this direction until much later on, when it would be guided by precepts altogether different and which were to be formulated by thermodynamics.”

Quotes | By
The following are quotes by Cauchy:

“I shall never flaunt the little learning that I have acquired through the care and help my father has given me. If I have learned anything, it is only because he took care to teach me. Had he not taken upon himself the trouble of instructing me, I would be as ignorant as many other children.”

“Men pass away, but their deeds abide.”