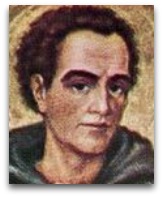 Influences
Augustine, in his later years, supposedly, was influenced by Plotinus, particularly his Neoplatonism views. [2]

Confessions
In 400AD, Augustine, in his existographical work Confessions, discusses how he was made, via the actions of his mother, to detach from a women he had “slept with for many years”, with whom he had a son, and put into a proper marriage, arranged by his mother, that would lead him to Christianity; he comments on this:

“My heart which was deeply attached was cut and wounded, and left a trail of blood.”

He also discusses his upbringing and how he grappled with choosing between Christianity (his mother’s faith), Manicheanism (a community he resided in for nine years), and Epicureanism (he enjoyed worldly pleasures); the gist of which is as follows: [6]

“Nothing kept me from an even deeper whirlpool of erotic indulgence except fear of death and of your coming judgment which, through the various opinions I had held, never left my breast. With my friends Alypius and Nebridius I discussed the ultimate nature of good and evil. To my mind, Epicurus would have been awarded the palm of victory, had I not believed that after death, the life of the soul remains with the consequences of our acts, a belief which Epicurus rejected; and I asked: if we were immortal and lived in unending bodily pleasure, with no fear of losing it, why should we not be happy? What else should we be seeking for?”

Very interesting indeed. Very similar to: "we all have to live and die with the consequences of the choices of our actions".

Genesis
Augustine, asserted, supposedly (Ѻ), on theological grounds, that everything in the universe was created by god in the same instant, and not in six days as a plain reading of Genesis would require.

Free will | Sin
On the subject of free will, Augustine had the following to say: [4]

Anti-Epicureanism
Augustine, in his 426 City of God (§14:1-3), argued that Epicurean and Stoic philosophies were aimed at living (reactively existing) according to the flesh, instead of according to the spirit or soul, and hence sin-ridden philosophies. (Ѻ) The gist of his oft-cited argument as follows:

“Let those philosophers disappear, who attribute natural corporeal principles to the intelligence attached to matter, such as Thales, who refers everything to water, Anaximenes to air, the Stoics to fire, Epicurus to atoms, that is to say, to infinitely small objects that can neither be divided nor perceived. Let us reserve the same fate to all the other philosophers, who are too numerous to name and who claimed to have found in simple and combined substances, lifeless or living, indeed in what we call material bodies, the cause and principle of things.”

Life | Non-life issue
On the life from non-life paradox, Augustine puts it like this: [3]

“Some of them believed that inanimate beings could produce living beings. Such was the case of the Epicureans; these philosophers, and others like them, were incapable of imagining anything but what their heart, corrupted by their senses, allowed them to see.”

Education
Augustine, according to his own reports, did not procure a zeal for wisdom until age 19: [6]

“Many years of my life had passed by—about twelve—since in my nineteenth year I had read Cicero’s Hortensius, and had been stirred to a zeal for wisdom.”

He goes on to state that "quest for wisdom" did not come at once, but resulted as a vexation between (a) despise for earthly success and (b) disease of lust.

“I am quite certain that I am, that I know I am, and that I love this being and this knowing. Where these truths are concerned I need not quail before the academicians [skeptics] when they say: ‘what if you should be mistaken?’ Well, if I am mistaken, I exist. For a man who does not exist can surely not be mistaken either, and if I am mistaken, therefore I exist.”

“That which is called the Christian religion existed among the ancients, and never did not exist, from the beginning of the human race until Christ came in the flesh, at which time the true religion which already existed began to be called Christianity.”

“The good Christian should be beware of mathematicians, and all those who make empty prophecies. The danger already exists that the mathematicians have made a covenant with the devil to darken the spirit and to confine man in the bonds of hell.”