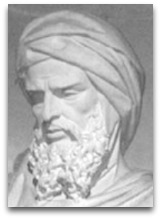 Aristotle
Averroes is generally known as the "commentator" of the work of Aristotle; he tried to reconcile the Quran with Aristotle.

Three impostors
Averroes is associated, by scholars including Pierre Bayle (1697) (Ѻ) and Ernest Renan (1852), to have originated the “three impostors” hypothesis. [1]

Influenced
Averroes influenced: Dons Scotus (Ѻ), Siger of Brabant, Lucilio Vanini, and Salman Rushdie, the latter of whom, of note, adopted the name “Rushdie” in honor of Averroes, aka Ibn Rushd.

Quotes | On
The following are quotes on Averroes:

“Averroes, this great man, who had no religion, used to say that he preferred that his soul should be with the philosophers than with the Christians. Averroes called the Christian religion impossible because of the mystery of the Eucharist. He called that of the Jews a religion of children, because of the various precepts and legal obligations. He admitted that the religion of the Muslims, which looks only to the satisfaction of the senses, was a religion of swine?”


Quotes | By
The following are quotes by Averroes:

“Knowledge is the conformity of the object and the intellect.”

References
1. (a) Renan, Ernest. (1852). Averroes et l’averroisme. Publisher.
(b) Hecht, Jennifer M. (2003). Doubt: A History: The Great Doubters and Their Legacy of Innovation from Socrates and Jesus to Thomas (Al-Ghazzali, pgs. 233-37; Averroes, pgs. 237-39; three impostors, pg. 332). HarperOne.
2. (a) Libera, A de. (1996). Introduction to Averroes, Le Livre du didcours decisive (quote, pg. 80-81). Garnier-Flammarion.
(b) Minois, Georges. (2009). The Atheist’s Bible: the Most Dangerous Book that Never Existed (translator: Lys Weiss) (Averroes, 16+ pgs; quote, pg. 28). University of Chicago Press, 2012.
3. Translator. (1714). The Life of Lucilio (alias Julius Caesar) Vanini: Burnt for Atheism at Toulouse with an abstract of his writings being the sum of the atheistical doctrine taken from Plato, Aristotle, Averroes, Cardano and Pomponazzius's philosophy with a confutation of the same; and Mr. Bayle's arguments in behalf of Vanini completely answered (Amz) (pg. 24). Publisher, 1730.