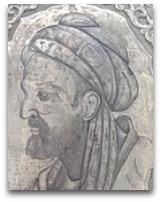 Overview
Avicenna gained fame when, as a doctor, he cured the sultan of Bukhara, who rewarded Avicenna by giving him access to a considerable library, wherein he was attracted to a neo-Platonic reading of Aristotle, wherein, e.g., he learned to speak about an afterlife. [1]

“I reveal to me the origin of their second – first or perhaps second – cause of existence. Though these figures will be shown the cause of many dangers of ulcers and diseases. Division of the spiritual from the material parts. And how the child breathes and how it is nourished through the umbilical cord; and why one soul governs two bodies, as when one sees that the mother desires a certain food and the child bears the mark of it. And why the child [born] at eight months does not live. Here Avicenna contends that the soul gives birth to the body and every member, but he is in error.

In the case of this child the heart does not bet and it does not breath because it lies continually in water. And it were to breathe it would be drowned, and breathing is not necessary to it because it receives life and is nourished from the life and food of the mother. And this food nourished such creature in just the same way as it does the other parts of the mother, namely the hands, feet and other members. And a single soul governs these two bodies, and the desires and fears and pains are common to this creature as to all the other animated members. And from this it proceeds tht a thing desired by the mother is often found engraved upon those parts of the child which the mother keeps in herself at the time of such desire; and a sudden fear kills both mother and child. We conclude therefore that a single soul governs the bodies and nourishes the two [bodies].”

Quotes | By
The following are quotes by Avicenna:

“The knowledge of any thing, since all things have causes, is not acquired or complete unless it is known by its causes.”

“It is not so easy and trifling to call me a heretic; no belief in religion is firmer than mine own. I am a unique person in the whole world, and if I am a heretic; there is no Muslim anywhere in the world.”