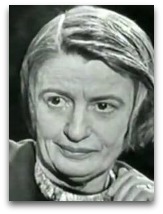 In existographies, Ayn Rand (1905-1982) (IQ:160|#538) [RGM:456|1,500+] (GFG:18) (CR:34) was a Russian-born American “vulgar philosopher” (Solomon, 1981), extreme atheist and activist, and semi-ranked smartest woman ever, noted for her applied atheism philosophy of objectivism, which argues that because each of us is born into a godless world “alone”, each of us therefore is “justified in pursuing our own self-interests”, much of which is outlined in her 1957 magnum opus Atlas Shrugged. [1]

Difficulties on theory
While Rand is correct in her godlessness, a salient difficult in her progressiveness of this knowledge, is that we do not come into the world “alone”, remain alone, and dereact (die) alone, but rather in infancy, in adulthood, and in old age, we “find ourselves essentially linked to other people”, as Robert Solomon points out. [2] Rand’s objectivism philosophy, in other words, lacks an understanding of “linking” (or bonding), i.e. human chemical bonding, the exchange force nature thereof, and the Goethean daimonic principle, aka the Adamsian waves and tides theory, among other issues associated with human coupling theory (see: free energy coupling).

“If devotion to truth is the hallmark of morality, then there is no greater, nobler, more heroic form of devotion than the act of a man who assumes the responsibility of thinking. The alleged short-cut to knowledge, which is faith, is only a short-circuit destroying the mind.”

“If any civilization is to survive, it is the morality of altruism that man have to reject.”

“You are never called upon to prove a negative; that is a law of logic.”

— Ayn Rand (1979), response to being asked (V) if the reason she does not believe in the existence of god was because that you can’t prove that such an “entity, being, or energy” exists, by Phil Donahue; to which she responded that there is no proof and no one can give such a proof

“The three As: Aristotle, Aquinas, and Ayn Rand, speaking in big terms, are the three main philosophers who have identified important philosophical truths.”