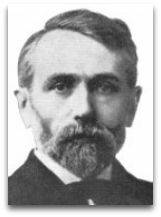 In thermodynamics, Bakhuis Roozeboom (1854-1907), or Bakhuius Roozboom (among other variants), was a Dutch chemist, one of the founders of physical chemistry, a product of the Dutch school of thermodynamics, noted for his circa 1901 “phase theory”, as applied especially to the phenomena of solidification. [1]

Education
In 1872, Roozeboom graduate first in his class at the Hoogere Burgerscholen, a secondary school upper class citizens.

In 1878, he became a lecture assistant at Leiden University. In 1881, he took candidate degree at Leiden in mathematics, astronomy, physics, and chemistry and in 1884 completed with a dissertation About the Hydrates of Sulfurous Acid, Chlorine, Bromine, and Hydrogen Chloride, concerning the dissociation phenomena of these gases (solids which when heated split into a liquid and a gas). Roozeboom’s dissertation contained the graphical results of a then unexplained anomalous behavior for the hydrate of hydrogen bromide, which made a strange form of P-T plot, with a minimum and maximum dissociation temperature. This graphical anomaly or ‘startling phenomenon’, as it was called, attracted the attention of Johannes Waals, who within the following two months reported to have found a solution, in the guise of a Clausius-Clapeyron style differential equation.

In 1886, Johannes van der Waals introduced Roozeboom to the 1876 phase theory of American engineer Willard Gibbs, which gave Roozeboom a sound theoretical basis on which to continue his investigations. [2]

In 1896, Roozeboom succeeded Jacobus van’t Hoff as professor of chemistry at the University of Amsterdam, where he continued his work on heterogeneous equilibria, which he had begun at Leiden University. During these years, he stimulated his PhD students to work out the details of his phase theory, an effort which resulted to produce two or three graduate students per year. The results were summarized in Die Heterogenen Gleichgewiche vom Standpunkte de Phasenlehre, the first and second volume of which appeared in 1901 and 1904. After his death, some of his pupils and students, namely E.H. Buchner, A.H.W. Aten, and F.A.H. Schreinemakers, continued his publication. [3]