In experiments, ball and clay experiment was an experiment, performed in circa 1720 by Willem Gravesande, or possibly earlier by Giovanni Poleni (1683-1761), in which inelastic balls (brass), of various masses, but of the same size, were released from various heights, or rolled down a ramp from various heights, and allows to fall onto a clay surface; after which the indentation, mass, and height were recorded, and used to experimentally resolve the vis viva controversy, i.e. whether it was momentum mv or vis viva mv² that was conserved in the process; the latter was the conclusion.

Overview
In 1670, French physicist Edme Mariotte seems to have been the first to have conceived of the idea to employ clay to search, via experiment laws on inelastic collisions; his main experiment being the use of clay ball pendulums, i.e. pendulums made with clay bobs, sizes which he varied, with which he measured the impact of the collisions, by indentation of the clay.

In circa 1720, Dutch physicist Willem Gravesande, at Leiden University, to test Gottfried Leibniz’s model of vis viva, performed a number of experiments wherein he dropped balls of different mass on soft clay, finding, surprisingly, that if the heights from which the balls fell were inversely proportional to their masses, the indentations made by the balls would be the same. The following, is a modern rendition of the experiment, with clay depths exaggerated: 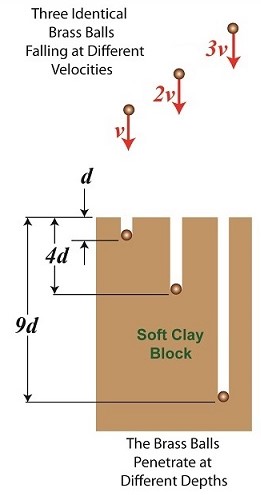 Gravesande, in more detail, allowed brass balls to be dropped (or rolled down a ramp) with varying velocity onto a soft clay surface and found that a ball with twice the velocity of another would leave an indentation four times as deep, that three times the velocity yielded nine times the depth, and so on; shared these results with Emilie Chatelet (IQ=190) and with Voltaire (IQ=195) who in turn, predominantly the former, subsequently corrected Newton's (IQ=215) formula E = mv to E = mv², and thus synthesized the first version of the conservation of energy (vis viva into vis mortua); he also is the inventor of the ball and ring experiment, a significant experimental precursor to the eventual formulation of thermodynamics.