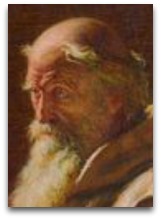 John the Baptist | Aquarius
In c.710, Bede, supposedly, associated John the Baptist with the Aquarius constellation, the man carrying the water jar, such as shown below (middle right):

This connection, in turn, as deciphered by Alvin Kuhn (c.1933), Tom Harpur (2004), and Dorothy Murdock (2008), supposedly, connects back with Anubis, aka the "bringer of the waters" (in the celestial Nile River as Milky Way sense of things), above left, who like John the Baptist, was beheaded, in an astro-theological sense. [1]

Warmed sparrow | Religion
In 627, as recounted by Bede (731), the missionary bishop Paulinus approached King Edwin of Northumberland in aims to sell the Christian gospel to him as the new religion for the kingdom. Edwin was willing to listen, but also called together a meeting of his council elders, which included his pagan high priest, Coifi. After Paulinus presented the gospel to him, one of the chief advisors replied with the following: [2]

“Your Majesty, when we compare the present life of man on earth with that time of which we have no knowledge, it seems to me like the swift flight of a single sparrow through the banqueting-hall where you are sitting at dinner on a winter’s day with your thanes and counselors. In the midst there is a comforting fire to warm the hall; outside the storms of winter rain or snow are raging. This sparrow flies swiftly in through one door of the hall, and out through another. While he is inside, he is safe from the winter storms; but after a moment of comfort, he vanishes from sight into the wintry world from which he came. Even so, man appears on earth for a little while; but of what went before this life or of what follows, we know nothing. Therefore, if this new teaching has brought any more certain knowledge, it seems only right that we should follow it.”