In religio-mythology, Beheading of John the Baptist, aka “Beheading of Yahya” (Islamic), refers the Biblical or Quranic story of the cutting off of the head of John the Baptist, while in prison; which is a re-write of the original Egyptian view of the head of the Anubis constellation (Aquarius constellation) being perceptually "cut-off", above the horizon, on Aug 29 at midnight.

Egyptian | Astro-theology
On Jun 24, astro-theologically speaking, each year, the Aquarius constellation, aka the “water bringer”, rises, for the first time, above the horizon.

In Egyptian mythology, the Aquarius constellation, as the Greeks called it, was associated with the god Anubis, and was thought to be symbolic of the “bringing of the water” of the annual Nile River flood, lasting 150-days (see: Noah's flood), from Jun 25 to Dec 25. [2] 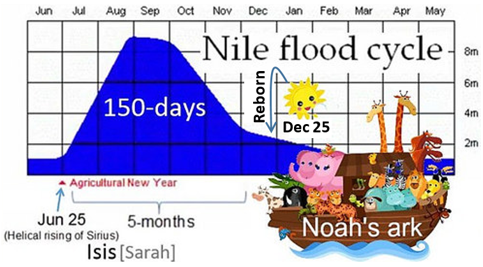 At midnight on Aug 28 to 29, as seen from Alexandria, the head of Aquarius or Anubis appeared to be cut off (as shown in gif image above, left):

“At midnight on Aug 28 and 29, Aquarius was seen at Alexandria above the southern horizon, travelling along the ecliptic with his head above the equator, as though it had been cut off (Matthew 14:10).”

“Further Thoughts on John the Baptist earlier article followed Massey [c.1890] in equating John with the Egyptian god Anubis, ... As Aquarius, John decreases from 24 June, getting gradually lower in the sky until 29 August, when he gets his head cut off.”

In other words, only the head of Anubis (Aquarius or John) was seen above the horizon. Hence, a myth was made to explain this.

Christian myth
In c.150AD, during the Roman recension, polytheistic Egyptian mythology was recast into monotheistic Christian mythology, during the course of which the god Anubis, aka the "water bringer" or "baptist", was recast into the character of the man John the Baptist and the following nonsense story of how he lost his head in prison over the whim request of the daughter of Herodias, because she was danced so good:

“On Herod’s birthday the daughter of Herodias danced for the guests and pleased Herod so muchthat he promised with an oath to give her whatever she asked.Prompted by her mother, she said, “Give me here on a platter the head of John the Baptist.”The king was distressed, but because of his oaths and his dinner guests, he ordered that her request be granted and had John beheaded in the prison. His head was brought in on a platter and given to the girl, who carried it to her mother. John’s disciples came and took his body and buried it. Then they went and told Jesus.”

(add)
Islamic myth
In c.700, Muslims believed that the head of John the Baptist, aka “head of Yahya”, existed and various Caliphs were purporting to have possession of it and have it preserved at various shrines; the following is an example synopsis:

“Abd al-Malik’s (646-705) (Ѻ) successor, Al-Walid (668-715) (Ѻ), had given up his father’s apocalyptic ideas referring to Jerusalem and expanded the sanctuary of John the Baptist in Damascus, the Haram, where the head of John the Baptist was preserved, and site which had already been treasured by Mu’awiaya (639-661).”

Presently, Muslims believe, according to legend, that the head of John the Baptist (Ѻ) is stored in the Umayyad Mosque (Ѻ) in Damascus, Syria, and is known to Muslims as the “Shrine of Yahya”.