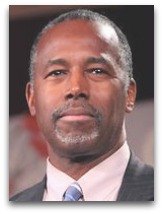 In hmolscience, Ben Carson (1951-) is an American neurosurgeon, a 2014 ranked smartest person existive (#21), turned 2016 US republican presidential candidate noted for his public interview comments on his faith in god vs science in an age where some 60 percent (average scientists) to 95 percent (national academy scientists) of scientists don't believe in god.

“And you know, I get a lot of grief out there. People say, ‘How can you be a scientist and believe that god created the earth? Obviously, you know [they say] we developed from a puddle of promiscuous biochemicals. And if you believe in anything other than that, you’re a moron.’ I don’t criticize them. I say, ‘Can you tell me how something came from nothing?’ And of course they can’t. They say ‘well, we don’t understand everything.’ I say ‘ok, no problem’. ‘I’m just going to give you that there’s something’. And now you’re going to tell me there’s a big bang, and it comes into perfect order? So that we can predict seventy-years hence when a comet is coming, that kind of precision. And they say, ‘Well, yeah.’ And I say, ‘But don’t you also believe in entropy, that things move toward a state of disorganization?’ [they say] ‘Well yah’. [I say] ‘So how does that work? “And they say, ‘We don’t understand everything.’ And I said ‘I’m not sure you understand anything! ‘ But, I said, ‘I’m not going to be critical of you, not a problem. You’re entitled to believe what you believe, even though it requires a lot more faith than what I believe. But everybody believe what you want to believe.”

— Ben Carson (2015), campaign speech (see: smart theism) (Ѻ) (V:0:08-1:42), Liberty University, Nov 11; in 6 Oct 2015 Carson commented (Ѻ), on The View, how some of the people he talked to about this evolution question included Nobel laureates; and in 2011, he was in a theist debate team (Ѻ) with Francis Collins against atheists Richard Dawkins and Daniel Dennett