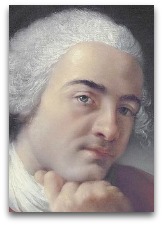 In existographies, Benard Belidor (1698-1761) was a French engineer and mathematician, noted for []

Quotes | On
The following are quotes on Belidor:

“In the winter of 1763-64, having occasion to repair a model of Newcomen’s engine belonging to the Natural Philosophy [Black’s] class at the University of Glasgow, my mind was again directed to it. At that period, my knowledge was derived principally from Desaguliers [Natural Philosophy], and partly from Belidor [Hydraulic Architecture].”

Quotes | By
The following are quotes by Belidor:

“It must be avowed that this [steam engine] is the most marvelous of all machines, and that there is not a single other of which the mechanism has so much resemblance to that of animals. Heat is the cause of its motion, a circulation takes place in its different tubes like that of blood in the veins; it has valves that open and close at the proper moment; it feeds itself, it rejects what it has used at regular intervals, it draws from its own work everything that it required for its support.”