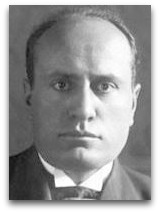 In hmolscience, Benito Mussolini (1883-1945) was an Italian prime minister, leader of Italy from 1922 to his ousting in 1943, notable for his 1902 to 1904 studies of the works of Friedrich Nietzsche, Vilfredo Pareto, and French engineer-philosopher Georges Sorel, of which, his readings of Pareto in particular, he attributes to his abandonment of socialism. [1]

Mussolini was one of the key figures in the creation of fascism. The ideological basis for fascism came from a number of sources. Mussolini utilized works of Plato (The Republic, 380BC), Georges Sorel, Nietzsche, and the socialist and economic ideas of Vilfredo Pareto, to create fascism.

In 1900, Mussolini registered at the University of Lausanne, in their department of social science, to attend courses delivered by Pareto. [4] Intermittently, he attended Pareto's courses and or his lessons up into 1904. [2]

Mussolini regarded Pareto as such a formative influence on his own fascist ideology that he offered to make Pareto a senator in Italy’s House of Lords; Pareto, however, owing to his failing health, turned down this offer. [3]

Majorana
In 1937 to 1938, Mussolini became entangled with the famous disappearance of Italian physicist Ettore Majorana, the so-called Italian Paul Dirac. Firstly, in 1937, Majorana applied for a professorship in Palermo; competition for the post, however, is Giovanni Gentile junior, senator Gentile’s son; to remedy the situation, the senator Gentile gets Mussolini to appoint Majorana Professor of Theoretical Physics at the University of Naples, in November 1937, supposedly, to Majorana’s irritation and or consternation.

Majorana takes up his [diverted] professorship on the 13th January, 1938, and carries out his duties punctually, leading a complete normal life, at least in appearance. But on the 25th March of this same year he sends, from Palermo, a letter to Antonio Carrelli, the director of the Naples Institute of Physics, where he works, in which he says “I have taken a decision which after everything is inevitable”. The following day, in his last telegram, he comments how “the sea has rejected me”, and is never heard from again. Enrico Fermi then enlists Mussolini’s help in carrying out a search for Majorana, to no avail.