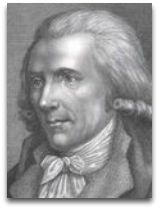 In existographies, Benjamin Thompson (1753-1814) (IQ:#|#) (Cattell 1000:571) (EPD:F2) (GPE:#) (CR:41), aka Count Rumford, was an American-born English physicist noted for his 1798 cannon-boring experiments (compare: ice rubbing experiment, 1799), which provided data for the first calculation of the mechanical equivalent of heat, and which laid question to the then-established caloric theory, as discussed in his famous “An Inquiry Concerning the Source of Heat which is Excited by Friction”. [1]

Overview
In 1787, Thomson reacted to reading about Scottish physician-chemist George Fordyce’s circa 1785 experiments in which he measured a gain in the weight of water after it was frozen, by repeating Fordyce’s experiment to see for himself if this was in fact the case. [4]

In 1799, Thompson, in his “Inquiries Concerning the Weight Ascribed to Heat”, weighted a block of ice just before it began to melt, and then after it had entirely melting, finding no significant change of weight, even though a considerable amount of latent heat (aka caloric particles, in Lavoisier’s view) had entered it; he therefore positioned this as evidence that heat is weightless. [5]

Name
Thompson was born in rural Woburn, Massachusetts. At the age of nineteen he married a wealthy widow, fourteen years his senior, from a section of the New Hampshire town of Concord that had formerly been called Rumford, hence his surname. [3]

Influences
Thompson promoted English physician-physicist Thomas Young to be lecturer at the Royal Institute, and it was in these lecturers that Young, using Thompson's cannon-boring data, gave the first modern definition of heat and also of energy.

Quotes | On
The following are quotes on Rumford:

“Rumford has informed us himself that he should probably have remained in the modest condition of his ancestors if the little fortune which they had to leave him had not been lost during his infancy. Thus, like many other men of genius, a misfortune in early life was the cause of his subsequent reputation. His father died young [age 2]. A second husband removed him from the care of his mother, and his grandfather, from whom he had everything to expect, had given all he possessed to a younger son, leaving his grandson almost penniless. Nothing could be more likely than such a destitute condition to induce a premature display of talent.”