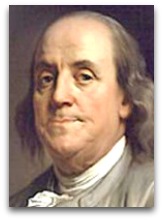 Electricity
In 1746, Franklin showed that a lightening is a discharge of electricity. [1]

In 1749, Franklin invented the "lightening rod" for buildings

In 1752, Franklin had one built (Ѻ) on the steeple of Christ Church in Philadelphia. This provoked theological objection; some of which is recounted as follows:

“When Benjamin Franklin invented the lightning rod, the clergy, both in England and America, with the enthusiastic support of George III, condemned it as an impious attempt to defeat the will of god. For, as all right-thinking people were aware, lightning is sent by god to punish impiety or some other grave sin—the virtuous are never struck by lightning. Therefore, if god wants to strike any one, Benjamin Franklin ought not to defeat his design; indeed, to do so is helping criminals to escape. But bod was equal to the occasion, if we are to believe the eminent Dr. Price, one of the leading divines of Boston. Lightning having been rendered ineffectual by the ‘iron points invented by the sagacious Dr. Franklin’, Massachusetts was shaken by earthquakes, which Dr. Price perceived to be due to god's wrath at the ‘iron points’. In a sermon on the subject he said, ‘In Boston are more erected than elsewhere in New England, and Boston seems to be more dreadfully shaken. Oh! there is no getting out of the mighty hand of god’.”

Library
Franklin’s personal library, numbering above 2,000 books, contain things such as William Cowper’s poetry and works by Baron d’Holbach, the latter of whom he visited in his Paris salon. (Ѻ)

Theism | Deism | Atheism
Franklin recounts his transition from theism to deism to atheism as follows:

“I was a scarce fifteen, when doubting by turns of several points, as I found them disputed in the different books that I had read, I began to doubt of revelation itself. Some books against deism fell into my hands. It happened that they wrought an effect in me quite contrary to what was intended by them; for the arguments of the deist, which were quoted to be refuted, appeared to me much stronger than the refutations. I soon became a deist.”

“I left town, as a teenager, because, in part, my indiscrete disputations about religion began to make me pointed at with horror by good people as an infidel or atheist.”

Quotes | On
The following are quotes on Franklin:

“Those who knew Benjamin Franklin will recollect, that his mind was ever young; his temper ever serene; science, that never grows grey, was always his mistress. He was never without an object; for when we cease to have an object we become like an invalid in a hospital waiting for death.”

Quotes | By
The following are noted quotes by Franklin:

“Lighthouses are more helpful than churches.”