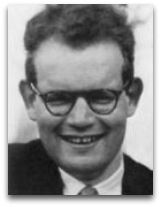 In existographies, Benoit Mandelbrot (1924-2010) (CR:11) was a Polish-born French-American mathematician and polymath noted for []

In 1961, Tribus was an audience participation in the April MIT “a new way to derive thermodynamics based on information theory” seminar by American engineer Myron Tribus, during which time Mandelbrot quickly attacked the MaxEnt interpretation, saying famously: [1]

“Everyone knows that Shannon’s derivation is in error.”

American electrical engineer Claude Shannon was in residence at MIT that week, so naturally enough Tribus went to see him. Shannon, according to Tribus, “was immediately able to dispel Mandelbrot’s criticism, but went on to lecture me on his misgivings about using his definition of entropy for applications beyond communication channels.” [1]

Thermodynamics
Mandelbrot, at some point, possibly stirred by the Tribus lecture, produced a study entitled “Thermodynamics of Discourse”. [2]

Mandelbrot, particularly in his 1962 thermodynamics work, on a generalized description of the temperature of an isolated system, seems to have been sufficiently influenced by Hungarian physicist Leo Szilard and American engineer Willard Gibbs. [3]

“Some existing models of income distribution considered as ‘thermodynamic’ theories. There is a great temptation to consider the exchanges of money which occur in economic interaction as analogous to the exchanges of energy which occur in physical shocks between gas molecules. In the loosest possible terms, both kinds of interactions ‘should’ lead to ‘similar’ states of equilibrium. That is, one ‘should’ be able to explain the law of income distribution by a model similar to that used in statistical thermodynamics: many authors have done so explicitly, and all others of whom we know have done so implicitly.”