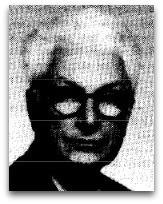 In hmolscience, Bernard Barber (1918-2006) was an American sociologist noted for his 1970 publication and commentary of the "Sociology 23" lecture notes of Lawrence Henderson.

Overview
In 1970, Barber published, for the first time, Lawrence Henderson’s “Sociology 23” lecture notes, in which he gave a retrospect “Introduction to L.J. Henderson”, discussing Henderson’s idea of the social system and equilibrium in respect to Gibbs and Pareto. [1]

Education
In circa 1936, Barber engaged in his undergraduate work in sociology at Harvard, during which time he attended Lawrence Henderson’s “Sociology 23”, the first time it was offered in the spring of 1938; he also took undergraduate sociology courses from: Pitirim Sorokin, Talcott Parsons, and Robert Merton. [2] Barber then completed his master’s and PhD degrees at Harvard; then was a sociology professor at Barnard College, Columbia University, for 35-years until his retirement, and in 1970 was chair of the sociology department. [3]

Quotes | Employed
The following are quoted cited, discussed, highlighted and or critiqued by Barber:

“A very important fact, which should never be forgotten in studying social phenomena, that nearly all supposedly qualitative questions turn out on examination to be quantitative.”

“Pareto’s social system is in some respects analogous in its usefulness to Gibbs’ physicochemical system. This system of Pareto’s disregards physical, chemical, and physiological phenomena, but makes possible in some measure the consideration of all interactions between persons. Like Gibbs’ system, it is clear and simple.”

“Henderson’s method in discussion is feebly imitated by the pile-driver. His passion was hottest when his logic was coldest.”

“If Pareto had truly joined the social sciences to the natural sciences, an achievement Henderson very much wanted to see, it is only to be expected that he would put Pareto in the great company of Gibbs, Bernard, and even Newton.”