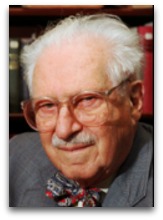 In existographies, I. Bernard Cohen (1914-2003) (CR:8) was an American history of science scholar—the first American PhD in the history of science—noted for a number of publications, beginning in the 1994, on the overlap of the natural sciences and the social sciences, and the history of some social Newtons in general, in what seems to have been a reaction followup to the publication of Philip Mirowski's famously provoking More Heat Than Light (1989).

Social Newtons
In 1994, Cohen outlined, somehow, how Irish-born English philosopher George Berkeley developed or had some type of “Newtonian sociology”. [1]

In 2008, Cohen cited Crane Brinton’s 1950 usage of the term “Newton of social science” in a discussion of Charles Montesquieu’s 1748 The Spirit of the Laws, wherein he compares a well-working monarch with the systems of the universe, employing some type of social gravitation theory. (Ѻ)

Einstein
Cohen's April 1955 interview with Albert Einstein was the last Einstein gave before his reaction end (death); published that July in Scientific American.

In 1985, Cohen, in his Revolution in Science, discussed Einstein’s views on the so-called Maxwellian revolution. [3]

Quotes | By
The following are noted and or representative quotes:

“The study of the interaction between the natural sciences and the social sciences has been a grossly neglected field of study.”

— Bernard Cohen (1993), “Analogy, Homology, and Metaphor in the Interaction between the Natural Sciences and Social Sciences, Especially Economics” [2]