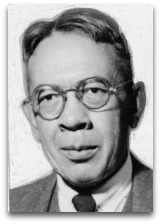 Education
DeVoto attended the University of Utah for one year, and then transferred to Harvard University, graduating from there with a degree in something in 1920, after which he worked as an English instructor at Northwestern University from 1922 to 1927, and then as a part-time instructor at Harvard, along with writing regular column “The Easy Chair” in Harper’s Magazine, from 1935 to 1955.

At some point, DeVoto took a course in the history of science from Lawrence Henderson. [2] Sometime thereabouts, Henderson, as reported by George Homans (1984), told DeVoto to read the general sociology works of Italian engineer Vilfredo Pareto: [3]

“It was Henderson, the philosopher of science, who told DeVoto to read Pareto, with fateful consequences for me.”

As early as March 1928 DeVoto was expressing enthusiasm for Pareto’s Traité de Sociologie Générale (Treatise on General Sociology), referring to Pareto as follows: [2]

“Pareto’s Treatise on General Sociology is the hardest boiled book I have ever read. Three times, since I passed my puberty, has my mind been made over [see: unlearn]. Once by a nexus of which Henry Adams was the center, once by a matrix of which Frazer burned brightest, and once by a long study of genetics and evolution. Pareto is doing the job a fourth time, and far more vitally than any others.”

This, of course, is two cultures social Newton genius comparison at its near finest, Goethe aside.

One of the convictions he learned from Pareto, as DeVoto biographer Wallace Stegner reports, was that any society exhibited continuities, which Pareto termed ‘residues’, and that it was extremely easy to confuse a temporary modification or rationalization of one of these—a ‘derivation’ in the Pareto jargon—with true change. [2]