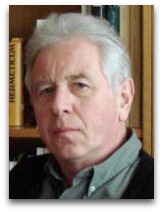 In human chemistry, Benard Joly (1944-) is a French chemistry historian noted for []

Overview
In 2006, Joly, in his “Goethe’s Elective Affinities: Between Science and Literature”, gave a rather detailed hypothesis of what chemistry works and theories German polymath Johann Goethe might have read in the pre-1809 years, prior to the writing of his physical chemistry based Elective Affinities; the abstract of which is as follows: [1]

“The title of Goethe’s novel Elective Affinities refer to the chemical tenet of rapports between different bodies which, from Etienne-François Geoffroy’s works in 1718, emerge as a prevailing theory [see: affinity theory] in the eighteenth-century chemistry. Goethe does not limit his views to the analogy between love attractions which made and break up couples and chemical processes which determine bonds and precipitations of chemical substances. His excellent knowledge of chemical and alchemical tradition leads him to consider affinity as a law of nature having effects in chemistry as well as in the living being and in the mind.”

Joly, in the article, states:

“Realize that the force that destroyed the couple Charlotte and Edward and binds the two new couples formed, Goethe invoked, as the title suggests, is the natural power of elective affinities, a concept borrowed from the chemistry of his time, and he did this, via Captain, in a brilliant exposition of popular science in chapter four of the first part, before Odile has appeared. The move is surprising, even daring in terms of the structure of the novel, as Goethe did not hesitate to leave his characters in the same storyline that gives them life, to let them hold a discourse which at this point the advance of the plot, cannot yet be an attempt to interpret their own history, and which is therefore, in a way, overhanging from the text of the novel, whose characters would have escaped a moment in order to expose the springs, not from their subjective existence as it unfolds in the body of the story, but the same processes as the author, or at least the narrator uses to structure his work and build the psychology of his characters.”

Then he discusses Walter Benjamin (1922) on Goethe’s Elective Affinities; then Goethe’s daemonic.

On the combined influence of Schelling, Kant, Bergman, Joly states the following:

“Goethe himself had however indicated in a letter of June 1809 to another of his friends, he had borrowed its title from a treaty of Swedish chemist Torbern Bergman published in Latin in 1775, De attractionibus electivis, and translated into German from 1782 under the title Die Wahlverwandtschaften, which is the title of the novel. The French translation of the Treaty of Bergman (1788) is called Treaty chymical elective affinity or attraction. Regardless of whether we actually read Goethe's book Bergman, where he became acquainted as a result of its trade with Schelling, which he had read in 1798 Ideas for a Philosophy of Nature published the previous year and the Soul of the World published the same year, works in which the professor of Jena, following Kant gave to chemical science a very important role, elective affinities expressed by him at a higher level the two forces fundamental attraction and repulsion. It is not impossible that Goethe had heard of "some ingenious pages on the application of elective affinities of chemistry elective affinities feelings" had written the Duchess of Bouillon, whose adopted daughter had married in 1795 Baron de Vitrolles that relates all this in his autobiographical Memories of a migrated. Gibelin, who reports this passage in an article in the Journal of Comparative Literature in 1953, notes that the Bouillon Duchess lived in Erfurt, but one of his friends went two or three times a month in Weimar, sometimes taking with Vitrolles him who claims to have had with Goethe and "very good conversation", which raises the possibility that he had informed the poet of the work of his stepmother.”

In 2011, Joly was one of the presenters at the UIB literature and chemistry conference.

Education
Joly presently is professor of the history and philosophy of science, Université de Lille 3, specializing in the history of chemistry. [2]