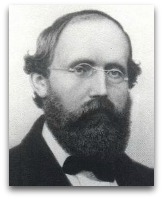 In existographies, Bernhard Riemann (1826-1866) (IQ:180|#115) [RGM:280|1,500+] (Murray 4000:10|M) (GME:11) (DN:1-2) (CR:14) was a German mathematician, noted for his so-called thermodynamic Riemannian geometry, which is unique, as compared to ordinary dynamical field type theories of matter, in the three dimensional Cartesian system or four dimensional Minkowski spaces, in that it has no ‘tensorial’ aspect, being that the theory has no dependence on spatial transformations. [1]

Education
At sixteen, he mastered Adrien-Marie Legendre’s Theory of Numbers, a work that is said to have sparked his interest in prime numbers. He then is said to have mastered calculus and analytical techniques by reading the work of Leonhard Euler and to have schooled himself in the physics of Wilhelm Weber (1804-1891), the person, to note, who discovered, in 1856, through his studies of electrical charges and magnetics, that light moves at a constant speed of 300,000 kilometers per second.

Soon thereafter, Riemann attempted to establish the mathematical connections between all major physical forces; but had a breakdown doing so. Upon recovery, he read a paper by Joseph Fourier on Fourier series, which attracted the interest of Carl Gauss, who praise it.

In 1858, Riemann produced a paper on electrodynamics that he hoped would be the definitive say on the matter; but he was soon, however, superseded by electromagnetic theory work of Scottish physicist James Maxwell.

Religion
As a child, Riemann attempted a mathematical proof for Genesis chapter of the Bible. [2]

“The three greatest German mathematicians to be: Carl Gauss, Riemann, and Karl Weierstrass.”

“I would ask whether anyone had proved the Riemann Hypothesis.”

— David Hilbert (c.1930), response (Ѻ) to being asked what he would do if he were magically awakened after centuries