In affinity chemistry, Berthollet’s affinity theory, as developed by French chemist Claude Berthollet during the years 1789 to 1803, an upgrade to Bergman’s affinity theory (1785), argued that reactions could go in the reverse direction, that a reaction equilibrium state occurred when opposing affinity forces (chemical force) balanced, and that the mass of products and or reactants played a role, among other details. [1]

Overview
In 1798, Claude Berthollet accompanied Napoleon’s military expedition to Egypt, during which time his observations of the Natron Lakes, led to new insights about affinity theory. (Ѻ) (Ѻ)

In his 1799 paper “Research on the Laws of Affinity”, Berthollet summarized his issues with the theory of elective affinity as follows: [4]

“The very term elective affinity must lead into error, as it supposes the union of the whole of one substance with another, in preference to a third; whereas there is only a partition of action, which is itself subordinate to other chemical circumstances … care must be taken not to consider this affinity as a uniform force which produces compositions and decompositions … Such a conclusion would lead us to neglect all the modifications which it undergoes form the commencement of action to the term of equilibrium.”

In short, Berthollet argued that the standard single elective affinity reaction, of the form:

would actuate such that force of affinity of the leaving species A could possibly split into two parts: [5]

Berthollet elaborated on this further in 1801 as well as in his 1803 Essai de Statique Chemique (Essay on Static Chemistry).

In 1801, Berthollet, in his Researches into the Laws of Chemical Affinity, wherein, following historical overview of the work of Torbern Bergman, givens an chapter two, entitled “Experiments Which Show that the Doctrine of Elective Affinities is Ill Founded”; the following a representative excerpt: [6] 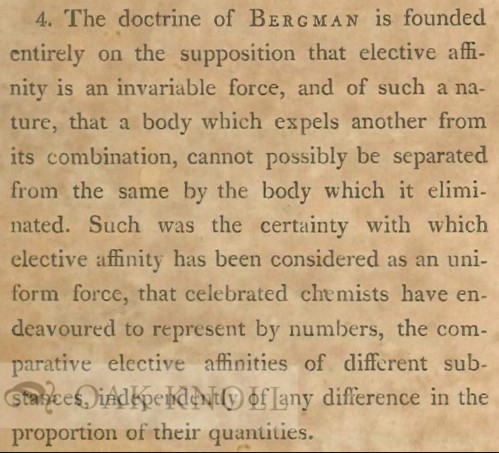 Human chemistry
In human chemistry, in German polymath Johann Goethe’s affinity chemistry based 1809 novella Elective Affinities, according to elective affinities scholar Jeremy Adler, Goethe refers to Berthollet’s affinity theory via the Captain’s comment “whether it still fits the newer doctrines, I am unable to say", about his present knowledge of affinity chemistry. Likewise in an 1826 letter Goethe famously commented: [2]

“For decades [I have been struggling] with Berthollet in the matter of the affinities.”

which is indeed quite a fascinating statement; the statement itself meaning that for some thirty years Goethe had been digging around in the experimentally-based revised affinity chemistry theories of Claude Berthollet so to better understand in the ins and outs of human existence.