In experiments, Berti vacuum experiment refers to a Mar 1638 experiment done by Gasparo Berti and Rafael Magiotti, wherein they upended a large lead siphon about 22 braccia (# feet) long, filled with water, and sealed at both ends, into a large tub of water, after which the opened the bottom valve of the tube, so to see if a vacuum would be made in the top.
Units
Galileo, either in his 1630 letter dialogue or in his 1632 Dialogues, stated that at 18 braccia (c.11 meters) or "18 cubits", which translates as "27 feet" or "34 feet" (Huff, 2010), depending on citation, that a siphon will stop working. There does not, to note, seem to be a consistent one-to-one conversion method to state in feet exactly what units Galileo employed and or stated as a max siphon height. Modern engineering hydraulics book, however, tend to cited 27 to 34 feet as being the maximal range for siphon operation, with 34 feet being the theoretical limit.
Dating
The Berti experiment is dated to the time when copies of Galileo’s Two New Sciences reached Rome (Dec 1638), when the Galileo vacuum device became public, and prior to the cessation of Galileo (1642), per reason that Berti stated that he “hoped to convince Galileo” of the existence of the vacuum, meaning that Galileo was still around when the experiment was performed.

Herein, we will assume the experiment was performed in 1639, a year after the Dec 1638 reading of the Galileo’s Two New Sciences, as the stimulus would have been strong in the wake of its arrival.

Overview
In 1630, Galileo engaged into a dialogue on the nature of the “pump problem”, the question of why pumps or siphons would not work beyond 18 cubits, with Giovanni Baliani, the gist of which (Ѻ) is shown below: 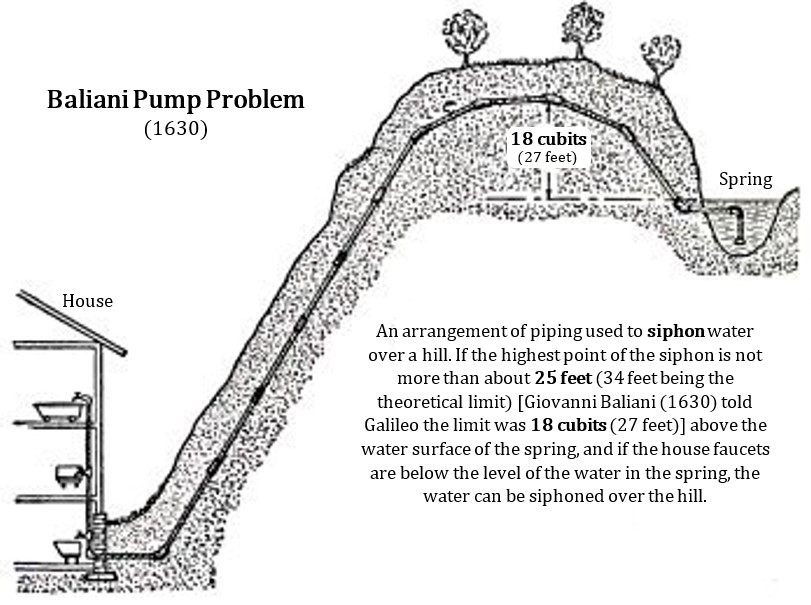 Galileo deciding that the reason the pump would not work beyond 18 cubits (27 feet), was because the water, in the pump (or siphon tubing), broke like a weak rope if it was longer than 18 cubits in length; Baliani using recourse to atmospheric pressure, as the reason.
In 1632, Galileo, penned his Dialogues Concerning the Two New Sciences, wherein, in the opening pages (pg. 14), he digresses, via a three-person dialogue, on the different points of view in respect to the Baliani pump problem, therein making his “thought experiment” pump (shown below) for measuring the “force required to break the water”, as he envisioned things. [1]

In Dec 1638, fifty-copies of his Dialogues, reached Rome, and were quickly sold out, one copy of which reaching the hands of Gasparo Berti and Rafael Magiotti, who decided to make a working model of Galileo “pump thought experiment” design, which they attached to the side of Magiotti’s house (as pictured), so to test Galileo’s theories. [2]

In c.1639, Berti, using this device, conducted his so-called vacuum experiment, in front of vacuum existence theory supporter Magiotti and vacuum denialists Athanasius Kircher and Niccolo Zucchi; the gist of which (Ѻ) is illustrated below:

In c.1640, Magiotti communicated, via letter, the details of Berti’s water column experiment to Evangelista Torricelli.
-
In 1643, Torricelli, in effort to make a reduced scale version of Berti’s water column experiment, decided to use mercury instead of water, and therein made the now-famous "Torricelli vacuum", aka the world's first mercury barometer. [4]
In 1653, Emmanuel Maignan, in his four-volume Course on Natural Philosophy, gave the following retrospective account of Berti’s experiment: [3]

“I refer to the notable experiment performed in Rome several years ago, when I myself dwelt there, by that most clever and erudite man Gaspar Berti, who was indeed my greatest friend.

This distinguished Gaspar, erected a rather long leaden tube AB (adjacent figure) out of doors on the wall of the tower of his house in which the stairs are, and made it secure by means of ropes fastened to iron clamps. I am obliged to say that I do not remember its length exactly, but I know that it must have been more (clearly very little more) than forty palms.

The upper end A of the tube was opposite one of the windows of the tower, while the lower end B was not far from the ground, and was provided with a brass tap or cόck R this being within the cask EF, filled with water for the purpose. To the upper end A was fitted, carefully joined, and cemented, a glass vessel in the form of a flask, rather large but very solid, and having two necks and mouths, the wider one below, into which the end of the tube was inserted at A, as into a box; the narrower above at C, of lead or else tin, as is the custom, and well made so that it would fit the stem of the threaded brass screw (cochlea) D very closely, this being the most solid kind of stopper and the most suitable for the business in hand.

This being made ready, the tap R closed and the cask EF filled with water to about its middle, the entire tube, as well as the glass vessel, was filled from above through the opening C, right to the top. Then the opening C was closed with the screw D, in order to seal the entire apparatus.

When the tap R was opened the water flowed, contrary to the hope of many [e.g. Kircher and Zucchi], out of the pipe into the cask EF, to an easily observable height; but not all of it flowed out, and it soon stood quite still. This was clear, because a mark was made in the cask at the surface of the water, and next day it was found that the water in it had remained exactly at the mark, although the tap R had remained open all the time.

Then, when this tap had been carefully closed again, the screw D was taken out at the top. And as soon as it was taken out, behold! the air rushed in with a loud noise and filled the space previously abandoned by the water. Then by lowering a sounding-line it was determined how much water was inside, or rather to what height the water stood in the tube, and it was found to stand about 18 cubits [27 feet] [13.7 meters] above the level of the water in the cask, at the mark L.”

The "bell" addition, figure MN, to the device, shown above, seems to have been the idea of Kircher:

“Athanasius Kircher had declared, that in order to get more evidence on which the vacuum in the said flask might be admitted or rejected, the experiment should be tried again, with a bell such as M in the flask, and a suitable iron hammer N. This could be attracted by a magnet outside, and then the magnet could be removed so that the hammer could fall and strike the bell. If, he said, the sound of this blow should be heard, it would be all over with the vacuum, since sound cannot be produced in one. But though he had reflected on this, it still remained untried [but according to Kircher and Zucchi, it must have been tried later].”

Magiotti also stated, in this discourse, that he had communicated Berti's experimental findings to "his good friend" Gaspar Schott, who in turn was later in communication with Otto Guericke, who did the same experiments, independently, of Berti, its seems (but not independent of Galileo's vacuum device).

In 1664, Gaspar Schott, in his Technical Curiosities, published a diagram (shown adjacent) of Berti’s vacuum experiment attached to Magiotti’s house. [5]

“As to the history of the quicksilver experiment [Torricelli vacuum], your reverence may know that the many wells of Florence which are cleaned out every year by means of siphons ‘by attraction’, gave signor Galileo occasion to observe the height of such attraction, which was always the same about 18 ells in that Tuscan measure; and so in every siphon or cylinder (as we like to say) however wide or narrow. From this had their origin his speculations about that matter, which were pout into his work on the resistance of solids. Afterwards, signor Gaspar Berti, here in Rome, made a led siphon which rose to about 22 ells from his courtyard to a room.”

“In the 1640s, Berti’s [vacuum] experiment appears to have remained entirely unknown except to the people actually involved, until Magiotti wrote to Mersenne in 1648 and Zucchi published his anonymous pamphlet in the same year. Who actually saw it, besides Berti? Certainly, Kircher, Magiotti, and Zucchi (Ѻ); and as we have seen, Maignan knew all about it. De Waard (1936) thinks Michelangelo Ricci (Ѻ) may have been there, but there is really no direct evidence for this assumption; nor is there any reason to believe that Torricelli witnessed the experiment. If Ricci was there, it would be strange if Torricelli did not hear of it from him, as Ricci was his mathematical executor. But Magiotti, near the end of the letter from which we have already quoted, specifically states that he wrote to Torricelli about the experiment, with the suggestion that if the water had been sea water, it would have stood lower in the tube. ‘They’, presumably Torricelli and Viviani (Ѻ), he tells Mersenne, ‘made experiments and finally came to the use of quicksilver’.”