In hmolscience, Bible vs. physical science conflicts refers to instances of conflict between so-called god-determined commandments, found in the Bible (or substitute religious book) and modern physical sciences, namely: physics and chemistry.

“Following on what went before, let me tell you in fun, that in my Elective Affinities, I took care to round off the inward, true catharsis, with as much purity and finish as possible, but I do not therefore imagine that any handsome fellow could thereby be purged from the lust of looking after the wife of another. The sixth commandment, which seemed to the Elohim-Jehovab to be so necessary, even in the wilderness, that he engraved it on granite tables with his own finger,—this it will still be necessary to uphold in our blotting-paper catechisms.”

Goethe, in other words, was summarizing that the main subject of his 1809 physical chemistry based novella Elective Affinities, was the conflict of the Bible-centric "though shall not commit adultery" commandment with the nature of the way so-called "adultery"—voluntary sexual intercourse between a married man and someone other than his wife or between a married woman and someone other than her husband—occurs in the test tube world of chemicals: 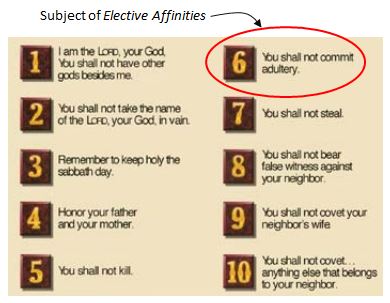 Dostoyevsky | Mark 12:31
In 1866, Russian novelist Fyodor Dostoyevsky published Crime and Punishment, in which the character Raskolnikov is said to apply Adolphe Quetelet’s social physics theories to the young women he meets on the street, reasoning that there is no point in helping her, since her fate had already been determined statistically by the laws of social physics.

In this example, according to a review by Harold Bloom, Dostoevsky is said to be exemplifying “how the laws of social physics conflict with Christ’s commandment to love one’s neighbor”, which, according to Mark 12:31 (Ѻ), is the second greatest commandment in the Bible. [2]