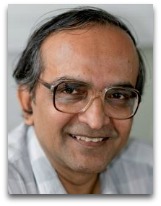 Overview
In 1995, Chakrabarti was involved in the first Kolkata Econophysics Conference, discussed below.

In 2003, Chakrabarti, in his “Money in Gas-Like Markets: Gibbs and Pareto Laws”, coauthored with Arnab Chatterjee and S.S. Manna, considered ideal-gas models of trading markets, where each agent is identified with a gas molecule and each trading as an elastic or money-conserving (two-body) collision. Unlike in the ideal gas, they introduce a quantity the “saving propensity” $λ of agents, such that each agent saves a fraction $λ of its money and trades with the rest. They show that steady-state money or wealth distribution in a market is Gibbs-like for relation $λ = 0, has a non-vanishing most-probable value for $λ ≠ 0, and Pareto-like when $λ is widely distributed among the agents. They compare these results with observations on wealth distributions of various countries. [1]