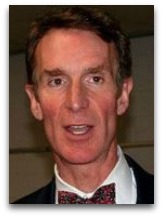 In human thermodynamics, William Sanford Nye (1955-), better known as 'Bill Nye' the science "guy", host of the Disney children’s science show Bill Nye the Science Guy (1993-1998), is an American mechanical engineer and science educator noted for his 1993 summary quote of human thermodynamics, wherein he discusses the thermodynamics of love as an subject of history: [1]

“So important and far-reaching are the laws of thermodynamics that some people try to use them to explain what governments should do, why people fall in love, and why there are car wrecks.”

Quote etymology
In the above quote, Nye makes reference to three different applications of thermodynamics in humanities: politics, love, and traffic. The etymology of the politics references seems to point to either the circa 1930s technocracy publications of the group led by American engineer Howard Scott or to the 1971 political thermodynamics of American chemical thermodynamicist Frederick Rossini. [2] The car wreck reference seems to be a reference to Belgian chemist Ilya Prigogine’s 1971 “Kinetic Theory of Vehicular Traffic” and other precipitates of this. [3]


Nye’s pre-1993 reference to someone who used thermodynamics to explain “why people fall in love” is puzzling?

He could be making a reference to William Rankine's circa 1845 "The Mathematician in Love" poem, wherein falling in love is said to be a type of thermodynamic potential similar to gravity. This, however, is remote, as Rankine's poem a very little known piece of work, only recently discovered, via Hmolpedia scholars citation clues, in 2013 (Hmolpedia article #3,086).

It may be that he is making a reference to Iranian mechanical engineer Mehdi Bazargan who in his 1956 Thermodynamics of Humans, theorized about love and thermodynamics.

Nye also could be making a reference to German polymath Johann Goethe, and his 1809 human elective affinity work, but this was not pure thermodynamics, but rather pre-thermodynamics (in the sense that affinity was precursor to free energy); and it is doubtful that Nye knew at this time that affinity equates to free energy change, a fact that only people with a chemistry background or interest know about this factoid.

It is possible, however, that Nye is making reference to Tom Stoppard’s play Arcadia, a modern-day remake or twist on Goethe’s Elective Affinities, in which Stoppard uses the second law concepts, such as heat death and sexual heat, in discussions of human passions and love. Arcadia premiered on April 13th, 1993, and Nye’s book was published on Sep 21, 1993, so it is possible Nye could have either saw the play or read a review.

To give an example summary of Stoppard’s use of thermodynamics in his play, writer Katherine Kelly summarizes in her 2001 Cambridge Companion to Tom Stoppard that the part in the play when Septimus quotes the tomb inscription ‘Et in Ardccadia Ego’, in Poussin’s celebrated seventeenth-century painting, to mean ‘even in paradise there is death’, that Thomasina knows about the second law and how the “entire universe is dying, inevitably heading towards an entropic dead end”, expressed as “heat goes to cold” as Valentine explains to Hanna. In another instance “It’s a one-way street … It’ll take a while but we’re all going to end up at room temperature”. In this scene, Kelly explains that: [4]

“Thomasina refuses to give in into despair. She is thinking of heat in more than one sense: not just the heat of thermodynamics but the heat of Eros. For she is falling in love with Septimus, and begs him to teach her to waltz.”

Education
Nye completed his BS in mechanical engineering at Cornell University in 1977, where he studied under Carl Sagan, who was one of his professors, then worked as an engineer at Boeing on the 747, before creating his award-winning show Bill Nye the Science Guy.