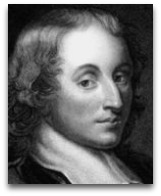 Thoughts
In c.1650, Pascal, in his Thoughts, the gist of which, based on name dominance, seems to have been an attempt to grapple with the theistic views of Rene Descartes as compared to the atheistic views Michel Montaigne, predominantly, along with the stoic views of Epictetus and ideas of Plato, in respect to things such as: god, justice, truth, nature, Jesus Christ, Christianity, ennui, misery, soul, Pyrrhonism (Ѻ), and or skepticism.

“I know not who put me into the world, nor what the world is, nor what I myself am. I am in terrible ignorance of everything. I know not what my body is, nor my senses, nor my soul, not ever that part of me which thinks what I say, which reflects on all and on itself, and knows itself no more than the rest. I see those frightful spaces of the universe which surround me, and I find myself tied to one corner of this vast expanse, without knowing why I am put in this place rather than another, nor why this short time which is given me to live is assigned to me at this point rather than at another of the whole eternity which was before me or which shall come after me. I see nothing but infinities on all sides, which surround me as an atom, and as a shadow which endures only for an instant and returns no more. All I know is that I must die, but what I know least is this very death which I cannot escape.”

In 1950, German-born American physicist Albert Einstein, in response to a 19-year-old engineering student on this problem, attempted an answer to this query. [2]

Pascal was one of the first, along with: Galileo Galilei, Evangelista Torricelli, and Otto Guericke, to experimentally disprove (see: defunct theory) the nature abhors a vacuum dictum. The following, supposedly (Ѻ), is an artistic reconstruction of Pascal demonstrating the Torricelli barometer: 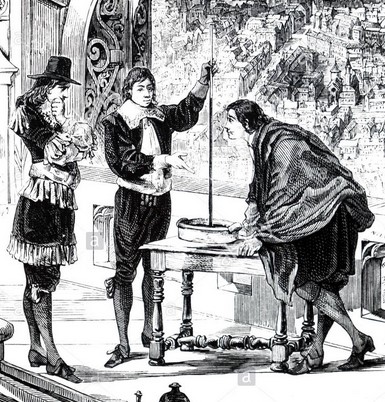 In 1648, Pascal reasoned that if it true, according to the results of the Torricelli vacuum (1643), an experiment he had been told about by Marin Mersenne, were that earth's atmosphere must have a maximum height, air pressure on a high mountain must be less than at a lower altitude.

“I have thought of an experiment which will remove all doubt, if it be executed with exactness. The experiment should be made in vacuo several times, in one day, with the same quicksilver, at the bottom and at the top of the mountain of Puy, which is near our town of Clermont. If, as I anticipate, the height of the quicksilver be less at top than at the base, it will follow that the weight or pressure of the air is the cause of this; there certainly is more air to press at the foot of the mountain than at its summit, while one cannot say that nature abhors a vacuum in one place more than in another.”

On 19 Sep 1648, after many months, Pascal convinced Florin Perier, husband of Pascal's elder sister Gilberte, to make the climb; Perier described the results as follows: (Ѻ)

“At eight o'clock, we met in the gardens of the Minim Fathers, which has the lowest elevation in town. First, I poured 16 pounds of quicksilver into a vessel, then took several glass tubes, each four feet long and hermetically sealed at one end and opened at the other. Then placed them in the vessel of quicksilver. I found the quicksilver stood at 26" and 3​1⁄2 lines above the quicksilver in the vessel. I repeated the experiment two more times while standing in the same spot. They produced the same result each time. Taking the other tube and a portion of the quicksilver, I walked to the top of Puy-de-Dôme, about 500 fathoms higher than the monastery, where upon experiment, and found that the quicksilver reached a height of only 23" and 2 lines. I repeated the experiment five times with care. Each at different points on the summit, found the same height of quicksilver, in each case.”

Pascal replicated the experiment in Paris by carrying a barometer up to the top of the bell tower at the church of Saint-Jacques-de-la-Boucherie, a height of about 50 metres. The mercury dropped two lines.

In c.1650, Pascal, in his Thoughts, attempted to grapple with the existence of god problem as follows:

“Either god is or he is not. But to which view shall we be inclined? Reason cannot decide this question. Infinite chaos separates us. At the far end of this infinite distance a coin is being spun which will come down heads or tails. How will you wager? Reason cannot make you choose either, reason cannot prove either wrong.”

He then attempts to solve the problem as follows:

“You have two things to lose: the true and the good; and two things to stake: your reason and your will, your knowledge and your happiness. Since you must necessarily choose, your reason is no more affronted by choosing one rather than the other. But your happiness? Let us weigh up the gain and the loss involved in calling heads that god exists. Let us assess the two cases: if you win you win everything, if you lose you lose nothing. Do not hesitate then; wager that he does exist.”

Quotes | On
The following are quotes on Pascal:

“In Pascal we have the curious combination of a refusal to accept the Copernican hypothesis with and unequivocal accretion of the Brunonian.”

“Pascal also performed a void within a void experiment (Ѻ)(Ѻ) . A Torricellian tube was placed within the empty space above the mercury column of a second tube. In the ‘inner barometer’ the level of the mercury in the tube was equal to the level in the bath. In the absence of air, the mercury column was not sustained, and thus it seemed clear that the pressure of the surrounding air was the cause of the elevation of the mercury in Torricelli's experiment. The plenists, however, were not convinced. The experiment could well be explained by a ‘restricted horror vacui’. Moreover, they considered air to be a light element, and thus the explanation using the pressure or weight of air, according to the plenists, was absurd.”

Quotes | By
The following are notable and or relevant quotes:

“Most of the evils of the world arise from man’s inability to sit still in a room.”

“I have examine if this god, of whom all the world speak, might not have left some marks of himself. I look everywhere, and everywhere I see nothing but obscurity. Nature offers me nothing, that may not be a matter of doubt and inquietude. If I saw nothing in nature which indicated a divinity, I should determine with myself to believe nothing about it. If I everywhere saw the sign of a creator, I should repose myself in peace, in the belief of one. But seeing too much to deny, and too little to assure me of his existence, I am in a situation that I lament, and in which I have a hundred times wished, that if a god does sustain nature, he would give unequivocal marks of it, and that if the signs which he has given be deceitful, that he would suppress them entirely: that he said all or nothing, to the end that I might see which side I ought to follow.”

“The last thing one discovers in writing a book is what to put first.”

“Cleopatra's nose, had it been shorter, the whole face of the world would have been changed.”