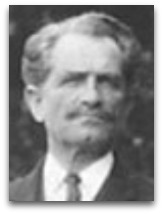 In existographies, Boris Sidis (1867-1923) (CR:34) was a Russian-born American psychologist noted, in psychodynamics, for his development and testing with William James, of the 1890s reserve energy theory of accelerated mental development.

In 1898, his son William Sidis was born, and with him he began to test out, in theory, James' reserve energy theory on the new child, the result of which became the most-famous of all forced prodigy experiments. [3]

William Sidis, would later go on to write (1920) a treatise on life theorized to be the operation of reserve energy acting the part of Maxwell's demon. [1]

Education
In Russia, at age 15, he was locked in a body-sized cell for two years (1884-86) as punishment for teaching peasants to read, an act misconstrued as a conspiracy plot; was released on the condition that he renounce all education. Left to America, and upon arriving at age 17 commented that:

“When I first set foot in the Boston Public Library, I felt as though the gates of heaven had opened to me.”

In short, Sidis was primarily autodidactic. A significantly influence, however, was his Harvard PhD advisor psychologist William James, to whom he named his son after.