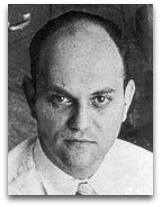 In existographies, Borisas Cimbleris (1923-2000) was a Lithuanian-born Brazilian metallurgical-nuclear engineer, physicist, and thermodynamicist noted, in economic thermodynamics, for his circa 1985 article “Economy and Thermodynamics”, wherein he argues that money is equivalent to the ‘ability to make other people work’, and therefore since work is the central term of thermodynamics, money is one of the underlying functional units, or something along these lines, in the thermodynamics of economies.

Overview
In 1985, Cimbleris, in his “Economy and Thermodynamics”, argued the following:

“An elementary definition of energy is ‘capacity of producing work’. A rough definition of money is the ‘ability to make other people work’. Money and its equivalents are the motive power of human action. This is admittedly cheap philosophy, but it works. This paper tries to associate classical economists’ ideas, of the last two centuries, with the concepts of thermodynamics. [Note: I must emphasize that this work is merely a translation of an unpublished paper written in the 80's. (I don't remember when and why). I'm sorry that I wasn't able to update it, 1998].”

Religion
The following is a quote from Cimbleris’ 1998 “Economics and Thermodynamics” article, which gives some insight into his religious position:

“A resource can be land, capital, energy, materials and combinations of such. Yet they have to be either tangible or measurable. The inborn resources of a human being are just body and soul. The soul is intangible. Gogol invented the business of selling dead souls, but nowadays there is little demand for these.”

The selling of “dead souls” here refers to Russian author Nikolai Gogol’s 1842 novel Dead Souls, a lampooning of sorts on the archaic Russian Empire practice of landowners owning surfs, and their “souls”, to work their land, and how in bookkeeping counting terms such as “six souls of serfs” were being used, being bought and sold. [4]

Discussion
A noted difficulty in Cimbleris’ theory is that "money", in itself is not the motive power or driving force of human action, but rather, correctly, Gibbs free energy is driving force of human chemical reaction and in these reactions (see: human chemical reaction theory) money is defined as a secondary field particle operating in the glue or rather exchange force of the dynamics of human-human interactions, human-human bondings, and human-human debondings. [1]

He began his career at Armour Research Foundation (USA). He was visiting professor at the University of Michigan, Polytechnic School of São Paulo, the Federal University of Pernambuco, and the Massachusetts Institute of Technology, Cambridge. He has held teaching positions at North Carolina State College, during graduate of Nuclear Engineering at UFMG, the National School of Engineering and the School of Engineering at UFMG. He was responsible, along with 6 more teachers for the implementation and development of postgraduate studies in management at UFMG teacher Aloisio pepper.

As a university administrator, he was head of the department of mechanical engineering and thermal engineering, School of Engineering, UFMG. Even at UFMG, was a member of the Board of Research, course coordinator of Nuclear Sciences and Techniques and course coordinator of graduate studies in thermal engineering. Worked in Comissariat à l'Énergie Atomique, Saclay, in France and in several laboratories thermal reactors in Germany, Sweden and England. Also, did the monitoring of licensing the reactor Aguirre (Puerto Rico).

Other
Cimbleris is the author of over 150 publications, 8 books (3 co-authored), and 8 translations of books. Entries about him are found in over five international encyclopedias. He was member of scientific societies such as the American Physical Society, History of Science Society, New York Academy of Sciences, the Brazilian Society for the Progress of Science and the Brazilian Society for the History of Science. He was a polyglot, mastered 35 languages, ​​and was translator of over 25 technical publications. He left society's legacy with a library collection of over 15,000 copies, in several areas.