In films, Breaking Bad is American dark humor television drama series, created by American writer-producer Vince Gilligan, which aired on the cable channel AMC, from 2008 to 2013, centered around the story of a chemistry teacher, Walter White, aka “Professor White”, played by Bryan Cranston, who is diagnosed with terminal lung cancer and who teams up with an old student to make and sell crystal meth, out of an RV, so to leave money for his financially-troubled family, e.g. pregnant wife, handicap kid, credit card issues, working two jobs (teacher + carwasher), etc., and the dark morality that mediates out of the state of the situation.

Overview
The show is unique in that it employs a certain amount of chemical philosophy, paralleled and or pitted against, in some scenes, Christian morality; resembling, in some aspects, Goethe’s 1809 physical chemistry based novel Elective Affinities, and the questions of “choice” amid times of dark morality, e.g. "whether to kill someone who might kill your family if you don't kill them?", the to kill or not to kill pros and cons, from S1:E3, is shown below, pitting Judaeo-Christian morality against street morality, so to say:

This is similar to what Goethe likewise discussed, e.g. "whether the mother who kills her newborn child should be given the death penalty" (Goethe, "Positions of Rights", 1771). The following are insight quotes into Gilligan's ideas, outlooks, religion, and general philosophy:

“My goal was to turn Mr. Chips into Scarface.”

“I was raised Catholic, [but] I’m pretty much agnostic at this point in my life. But I find atheism just as hard to get my head around as I find fundamental Christianity. Because if there is no such thing as cosmic justice [see: justice], what is the point of being good? [see: Jeffrey Dahmer] I feel some sort of need for biblical atonement, or justice, or something. I like to believe there is some comeuppance, that karma kicks in at some point, even if it takes years or decades to happen. My girlfriend says this great thing that’s become my philosophy as well. ‘I want to believe there’s a heaven. But I can’t not believe there’s a hell.’”

Dark morality
The following is thematic statement about the questions of dark morality mediated out in the series:

“You're going to see that underlying humanity, even when he's making the most devious, terrible decisions, and you need someone who has that humanity– deep down, bedrock humanity– so you say, watching this show, 'All right, I'll go for this ride. I don't like what he's doing, but I understand, and I'll go with it for as far as it goes.' If you don't have a guy who gives you that, despite the greatest acting chops in the world, the show is not going to succeed.”

“Thalidomide. The... The right-handed isomer of the drug thalidomide is a perfectly fine, good medicine to give to a pregnant woman to prevent morning sickness. But make the mistake of giving that same pregnant woman the left-handed isomer of the drug thalidomide and her child will be born with horrible birth defects. Which is precisely what happened in the 1950s. So chiral, chirality, mirrored images, right? Active, inactive, good, bad.”

In the credits, the title, names of actors and producers, were presented using “chemical letter” (or chemical alphabet) stylization, e.g. Bryan Cranston (Walter White), lead character, aka “Professor White”; some examples of which are shown below: 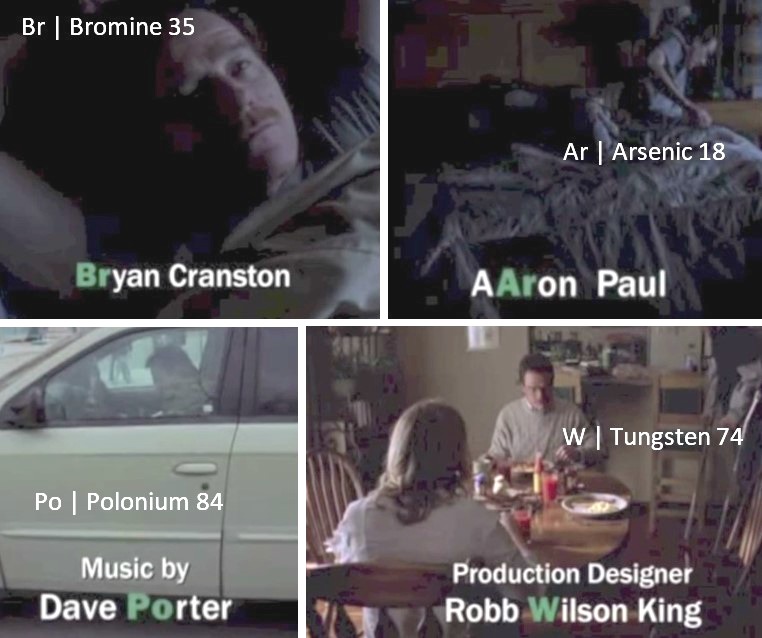 Soul scene
In the third episode, “… And the Bag’s in the River”, season one, the show opens to Professor White cleaning up the human that had been dissolved in hydrofluoric acid (shown adjacent; lower left), amid which his mind reflects back to, it seems, his college days, and dialogue with a woman, possibly his lover at the time, as shown adjacent right (main image), wherein she reads off the percentage of elements of a human, in moles, to him and he writes them down on a chalkboard, as follows:

at the end of which he comments how he thinks that something is missing, to which the woman replies “the soul”?

Gerson
In 2013, Kirth Gerson, in his “Breaking Bad Pilot: People are Chemicals, Too!” lecture style video, analyzed Breaking Bad as a type of "people are chemicals" purview or each human is an element (or chemical) reacting in a social system that makes chemicals, a sort of modern Elective Affinities analysis, so to say. [4]

“There’s got to be more to a human than that?”