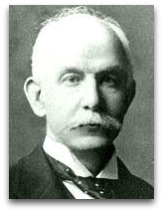 In hmolscience, Brooks Adams (1848-1927), noted younger brother of Henry Adams (1838-1918), was an American historian and lawyer noted for his 1895 publication The Law of Civilization and Decay, in which he applied the Helmholtz-version of the first law, i.e. that energy or force is conserved, Kelvin-version of the second law, i.e. that there is a universal tendency to the dissipation of energy, along with a theory of social contractions and dispersions, to develop a energetic theory or model of history, in reference, particularly, to its civilization rises and falls. [1] The following is a noted quote: [3]

“Thought is one of the manifestations of human energy, and among the earlier and simpler phases of thought, two stand conspicuous: fear and greed. Fear, stimulated by the imagination, creates belief in an invisible world, and ultimately develops a priesthood; and greed, which dissipates energy in war and trade. In earlier stages of concentration, fear appears to be the channel through which energy finds the readiest outlet.”

Overview
In order to characterize the “the intellectual phases through which human society must, apparently, pass,” according to Adams, “in its oscillations between barbarism and civilization,” in what amounts to movements from a "condition of physical dispersion to one of concentration”, that history, like matter, must be governed by a law that would seem to “correspond, somewhat closely, with the laws which are supposed to regulate the movement of the material universe.” [1] Brooks Adams, according to Eric Zencey (1983), argued that civilizations decline when their races run out of energy. [4]

Fundamental proposition
The theory that human intellectual history must be governed by the laws which regulate the material universe, according to Adams, is based on “the accepted scientific principle, that the law of force and energy is of universal application in nature, and that animal life is one of the outlets through which solar energy is dissipated”. [1] Starting from this statement, in what Adams refers to as the “fundamental proposition”, he then reaches two deductions:

(a) Human societies are forms of animal life.
(b) Societies must differ among themselves in energy, in proportion as nature has endowed them, more or less abundantly, with energetic material.

Beyond this, Adams outlines a number of very advanced social energy theories, for instance that “thought is one manifestation of human energy” or that “the velocity of a social movement of any community, is proportional to its energy and mass”, among others.

Education
Adams graduated from Harvard University in 1870, attended Harvard Law School for one year in 1871, and was a lecturer at Boston University School of Law from 1904 to 1911. Brooks Adams was very influential, with his ideas of an energetic model of history, to his older brother Henry Adams, who later developed his own, more advanced, thermodynamic theories of history.