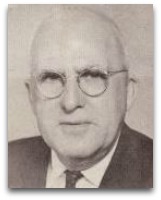 In existographies, Robert Bruce Lindsay (1900-1985) (GMG:4) (CR:33), oft-cited as "R. Bruce Lindsay", was an American physicist noted for a nearly six-decade long quest to explain social phenomena in terms of physical science, as exemplified by his 1927 article “Physical Laws and Social Phenomena”, his 1959 discussions of a thermodynamics based model of human ethics, his 1963 introduction of the "thermodynamic imperative" (a update of Wilhelm Ostwald's energetic imperative), as well as his 1983 chapter “Social Exemplifications of Physical Principles”; much of this inquiry focused on a study of energy and thermodynamics. [4]

Purpose | Minimum principles
In 1983, Lindsay, aged 83, in his chapter “Social Exemplifications of Physical Principles”, in followup to his earlier article “Physical Laws and Social Phenomena” (1927), written in the "brashness of his youth", i.e. a then age 27, MIT-minted, Bohr-mentored, Yale physics professor, says the following on purpose and minimum principles: [7]

With respect to the possible idea of purpose involved philosophers have argued that since Hamilton’s principle is not necessary for the deduction of the actual motion of the dynamical systems, i.e. the Newtonian or Lagrangian equations are fully adequate, we have no real logical ground for insisting that nature imposes a teleological requirement on motions in our experience. Nevertheless the fact that one can exhibit the principles of mechanics in a teleological guise is persuasive, since it serves to tie physical principles with an idea basic to the interpretation that human beings give too much of their ordinary experience, particularly in their relations with other human beings.

Hamilton’s principle, e.g., says that for a conservative dynamical system the motion between any two instants of time is such that the time integral of the difference between the kinetic and potential energies taken between these two instances has a stationary value. It has as if the system had a certain purpose to satisfy. A rational individual is said to arrange his actions so as to be sure of achieving his fundamental desires, whether it be to accumulate wealth or gain power over his fellow men. In particular, the aim here is almost always to try to attain the given desired end at minimum cost in human effort. This strongly suggests a heuristic connection with the [Gibbsian] minimum principles of physics.”

Lindsay, here, to note does not directly state that minimization of the Gibbsian for social systems is the quantitative function for the so-called "senses of purpose", as Einstein deemed things, felt by people in society, but he does previous to the above, in his section "The Principles of Thermodynamics", outline ideas on how Clausius-Gibbs based thermodynamics applies socially. The only connection Lindsay makes to the above is to give the example of George Zipf's 1949 principle of least effort.

Lindsay’s purpose as minimum principle supposition, to note, is reminiscent (Ѻ) of Soren Kierkegaard’s “where is the director?”

Physical sociology
In 1927, at the age of 27, Lindsay, as a newly MIT-minted, Bohr-mentored, Yale physics professor boldly venturing, as he says, into the so-called field of physical sociology, with the publication of his “Physical Laws and Social Phenomena”, a process which he describes, in 1983 retrospect, as follows: [5]

“Many years ago in the brashness of youth the writer prepared an article [“Physical Laws and Social Phenomena”, 1927] on the possible use of physical principles and concepts in the description and understanding of social phenomena. He called attention to the earlier efforts of social scientists like Auguste Comte, Herbert Spencer, and Lester Ward to apply physical concepts and laws more or less directly to social explanation. He emphasized the difficulties encountered in the use of such analogies, e.g., the attempt to introduce a ‘social force’ analogous to ‘force’ in mechanics, overlooking the highly specific meaning attributed to the term in physics, not always clearly grasped by the nonphysicist and indeed for a long time not even too precisely clear to many physicists and engineers. It was only later that his attention was drawn to the ideas and criticisms of Vilfredo Pareto, who in his monumental work Treatise on General Sociology (1916) stresses in great detail the same difficulties.”

In 1983, in his “Social Exemplifications of Physical Principles”, a followup to his 1927 article, Lindsay argues the following: [7]

“Do not social exemplifications of physical principles have some value for somebody? And is not this value to be found in their heuristic and pedagogical suggestions? In other words, can such social exemplifications of physical principles illuminate our understanding of the principles themselves and lead us to ask more intelligent questions about them? Can they possess pedagogical value for those striving to understand physics without the intention of becoming physicists or even scientists of any sort?

Affirmative answers to these questions will justify attention to the social examples even if their actual use in the development of the social theories is questionable. It is the purpose of the present essay to suggest that such social exemplifications of physical principles do indeed often have heuristic and pedagogical value. We begin with the principles of thermodynamics, a fruitful source of social examples.”

Ethics
In 1959, Lindsay, in his “Entropy Consumption and Values in Physical Science”, as summarized by Vincenzo Cioci (2010), argued the following: [6]

“Men should strive to increase the degree of order in their environment, opposing as much as possible to the natural tendency that the entropy has to grow in accordance with the second law of thermodynamics.”

In 1963, Lindsay published his his so-called thermodynamic imperative, which states that: [2]

“While we do live we ought always to act in all things in such a way as to produce as much order in our environment as possible.”

In this sense, Lindsay reasons that since every human process or action exhibits an increase in entropy, everything one does leaves a mark in one’s thermodynamic system, irrevocably. Hence, to counter this tendency, according to Lindsay, we should follow a certain code of conduct in life based on the laws of thermodynamics. [3]

American educator Dick Hammond has discussed and thought Lindsay's thermodynamics based ethics to some extent. [1]

Education
Lindsay, a seeming prodigy of sorts, at age 20, completed both his BA and an MS in physics from Brown University, then spent the 1922-23 academic year as a Fellow of The American-Scandinavian Foundation at the University of Copenhagen, under Niels Bohr and Hans Kramers, after which at age 24 he complete his PhD on atomic models of alkali metals at MIT.

Religion | Eating the forbidden fruit | Work
Lindsay, at one point, cites the Bible, Genesis section 3:19 specifically, namely the following statement: “In the sweat of thy brow shall thou eat bread”, i.e. the supposed punishment for the sinners who have eating the forbidden fruit in the garden of Eden, as being an example of the first law of thermodynamics. Others, likewise, have cited this passage in efforts to argue that labor is evil and a disgrace. (Ѻ) Lindsay, to clarify somewhat, concludes with the following: “In any case, we may be sure of one thing! There must be sweat (actual or metaphorical) in someone’s face if our so-called civilization is to endure.”

The full key passages, Genesis 3:17-19, according to the King James Version, which elaborate on the so-called Biblical reason behind man’s inherent fate on earth as a perpetual laborer owing to past sacramental sin of eating the forbidden fruit, is the following: (Ѻ)

And unto Adam he said, Because thou hast hearkened unto the voice of thy wife, and hast eaten of the tree, of which I commanded thee, saying, Thou shalt not eat of it: cursed is the ground for thy sake; in sorrow shalt thou eat of it all the days of thy life; (3:17) Thorns also and thistles shall it bring forth to thee; and thou shalt eat the herb of the field; (3:18) In the sweat of thy face shalt thou eat bread, till thou return unto the ground; for out of it wast thou taken: for dust thou art, and unto dust shalt thou return. (3:19)

This, to note, is a religio-mythology rewrite combination of (a) the 300BC Egyptian-Christian conceptualized “clay creation myth”, in the sense of ‘thou art but dust from the ground’ and (b) the 1700BC Sumerian mythology, story of the birth goddess Nammu, of the watery depths, said to have molding clay into the shapes of humans and bringing the molds to life to be a workforce replacement for the gods in the maintenance of the land, i.e. the point of man's existence, according to this myth, is to be workers for the gods, so they can rest in the heavens. Whatever the case, Lindsay takes this eating via someone else’s sweat (or work) tale, whether actual or metaphorical, or whether he believed in the existence of god, e.g. he says "here we find the Lord admonishing the sinners of the garden ...", to be indicative or representative of the so-called game version of the first law of thermodynamics, namely that “there is no such thing as a free lunch, someone always pays!”, as he says.

Difficulties on theory
Lindsay, on a few points, becomes rather opaque in regards to correctness; the following being one example:

“Clausius: ‘The entropy of the universe strives towards a maximum value.’ Accepting this universal applicability (recognizing, of course, that many if not most professional thermodynamicists do not; why should they?—they are not interested in the universe, but in applying thermodynamics to engines and chemical reactions), and ignoring for the moment some very important purely local exceptions, we can state the principle roughly in common form as follows: ‘Whenever a transformation of energy takes place it is accompanied by a certain loss in the ability to repeat that precise transformation.’ … From the standpoint of human beings the most important exception to the principle is found in the local behavior of living things that can ‘consume’ entropy or undergo biological changes in the process of their production and maintenance in which there is an actual reduction in entropy locally.”

Firstly, in regards to difficulties, human chemical reactions are no different than any other type of “chemical” reaction, powered CHNOPS+ natures aside, hence the existence of humans and human doings, goings, and behaviors are not “local exceptions” from the second law, as Lindsay deems things.

Secondly, the model of life being a type of local entropy decrease or reduction is a type of thermodynamic folklore, dating to at least the 1947 publications of Belgian-born English thermodynamicist Alfred Ubbelohde, if not before; hence, Lindsay’s argument, in this respect, is but regurgitation.

“From the standpoint of physics, chemistry, and engineering students, thermodynamics is a difficult discipline. Anything that can enable the student to grasp more readily the fundamental ideas involved is certainly worth of attention. As a human being the student is well equipped to feel at home in the field of social relations since they are a vital part of his or her everyday experience. Hence a study of the examples of thermodynamics in social phenomena can reinforce the student’s grasp of the subject. At the same time, these exemplifications can encourage the raising of valid questions about social problems (e.g. the value of the thermodynamic imperative) which might otherwise never be considered.”

“It is true that while we live, if we are cautious enough, we have the chance to prolong the time intervals between our human ‘phases’ so as to minimize encountering the phase points of life we call ‘accidents’.”