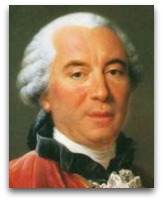 In science, Buffon (1707-1788) (IQ:175|#184), aka "Georges Leclerc" or Count of Buffon, was a French mathematician and natural philosopher noted for his 1745 comet impacting the sun nebular hypothesis planet formation model; for his circa 1774 experimental use of Newton’s law of cooling on iron balls to attempt calculation of the age of earth—during which time he, supposedly, found an increase in weight of iron when heated (see: fluid theory of heat); for being one of the first pre-Goethean evolutionists, views he derived from his comparison of old and new world animals—he was the main French precursor to Jean Lamarck. [1] Many of his views are found in his 36 volume Natural History, published in the years 1749 to 1788, with an additional volume of his post humorous notes in 1789.

Buffon addressed the maternal imagination theory in one of the chapters of his Natural History. [3]

Religion | Science
In 1778, Buffon published The Epochs of Nature (Epoques de la nature), his most controversial book yet, wherein he professed views seriously at odds with beliefs in the Church and Genesis, e.g. he discussed the origin of the solar system; proposed that the planets had been created by comets colliding with the sun; estimated the age of the earth to be 75,000 years (Bible: 6,000-yrs; Quran: not mentioned: Modern: 4.5-bya), estimated via experiments of cooling iron balls; declared that Noah’s flood had never occurred; and argued for a form if “implied evolution” via the assertion that animals retained parts that were vestigial and no longer useful. [5]

Living matter
In regards to the life/non-life subject, Buffon held the view that living bodies are distinct from inanimate matter in being composed of what her called “matiere vive” (live matter), whose particles have a propensity to move from the center to the edge of the bodies they constitute; whereas “matiere brut” (raw matter), conversely, is but matire vive that has died. He referred to active molecules in his discussion of this subject: [4]

“The life of the whole (animal or vegetable) would seem to be only the result of all the actions, all the separate little lives—if I may be permitted so to express myself—of each of those active molecules whose life is primitive and apparently indestructible.”

This “active molecule” position seems to be a type of living molecule theory.

Quotes
The following are noted quotes by Buffon: