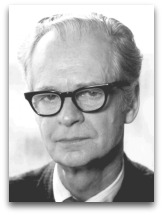 Pigeon | Training
In 1940, Skinner, supposedly, conceived of his so-called “Project Pigeon”, while sitting on a train to Chicago, and thinking about the need to attack Nazi planes in the air, during which time he looked out the window and saw a flock of birds. “Suddenly I saw them as ‘devices’ with excellent vision and extraordinary maneuverability. Could they not guide a missile?” (Ѻ) He bought some pigeons at a poultry store and proceeded, over a period of many months, to design an apparatus such that a bird could peck at the moving image of a target and thus steer the contraption. Skinner, in one experiment, took hungry pigeons, and when it made a turn clockwise, he would reward it with food, and soon he got the pigeons dancing in a clockwise circle. He then made the schedule of the reward more complex, e.g. the pigeon would have to first turn clockwise, then counterclockwise in a perfect figure eight, as shown below:

Skinner found found that within fifteen minutes, the pigeon would be responding like a "piece of machinery". The results of these experiments, led Skinner to believe that behavior is always deterministic. [4] Later, of note, Skinner grew increasingly frustrated, though, with Washington’s lack of interest in his invention. (Ѻ)
-
Skinner box | Rat
In c.1940, Skinner, growing his idea of “operant conditioning”, in respect to rat behavior, showing that behaviors could be changed by positive or negative reinforcements; to test this he made so-called "Skinner boxes" wherein rats pressed levers to get food: 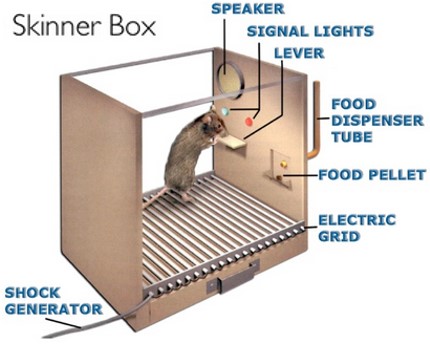 Skinner box | Baby
In 1945, Skinner built a “Skinner box” for his infant daughter Debby, a so-called “air crib” as he called it, or the “Baby in a Box”, as the public later came to call it, wherein she had adjustable humidity and thermostat sensors, as shown below: 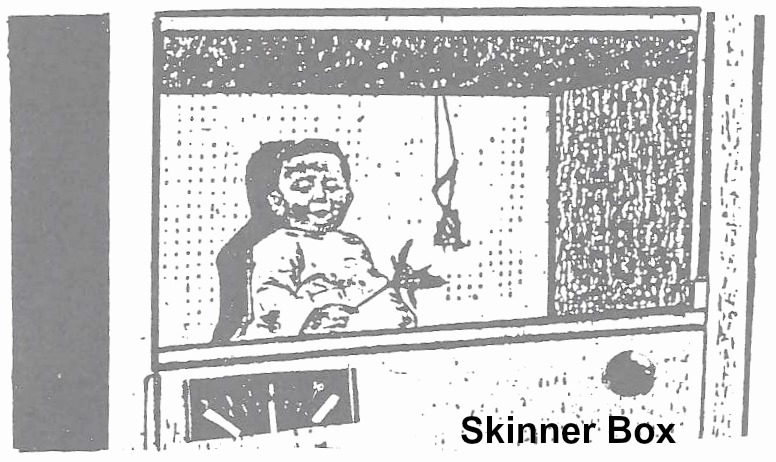 In studying the changes in behavior with variations in temperature and humidity, he found that, among other things, the crying and fussing would always be stopped by slightly lowering the temperature. [4]

Here, of note, we recall Frederick II’s c.1235 various “experiments” on humans, such as his soul experiment, his “original language” experiments done with children, and his digestion experiment.

Other
In 1948, Skinner, in his novel Walden Two, outlined, in story form, a utopian community, wherein the characters reject belief in free will, reject the proposition that human behavior is controlled by a thing such as spirit our soul, and in its place embrace the proposition that behavior is determined by environmental variables, and that by systematically altering these variables, a cultural system can be realized that approximates utopia. [1]

Other
In 1955, Keller Breland and Marian Breland, two of Skinner’s students, opened an “IQ Zoo”, in Hot Springs, Arkansas, which showcased some 160 types of animal training acts.

Quotes | By
The following are quotes by Skinner:

“I deny that freedom exists at all. I must deny it, or my program would be absurd. You can’t have a science about a subject matter which hops capriciously about. Perhaps we can never ‘prove’ that man isn’t free; it’s and assumption. But the increasing success of a science of behavior makes it more and more plausible.”

“Tolstoy was justified in calling every sickness a unique event. Every action of the individual is unique, as well as every event in physics and chemistry. But his objection to a science of medicine in terms of uniqueness was unwarranted.”

“I don’t believe that I have a very high IQ; I think I’ve done very well with what I’ve got. There are skills I just don’t have. Fortunately, I got into a field [behaviorism] where I could use the ones I do have — largely practical skills. I don’t think I’m a classical picture of a great thinker, or anything of that sort.”