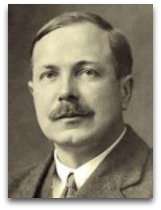 In human thermodynamics, Charles Galton Darwin (1887-1962), or "C.G. Darwin", was an English physicist, grandson of evolution founder Charles Darwin (Charles Robert Darwin), notable, through the publication of his 1952 book The Next Million Years, written at the age of 65 (similar to Goethe who wrote Elective Affinities at age 60), to have conceived of people as "human molecules" and coined the term "human thermodynamics", a feat which larger part marks the start of the science of modern human thermodynamics, the thermodynamic study of systems of human molecules. [1] In this work, after defining people to be molecules, C.G. Darwin then grandly states: [2]

“Through determining some kind of laws of human thermodynamics, we shall be more successful in doing good in the world.”

On this objective, Darwin argued that in order to logically predict human history, one would first need to define the person as a point molecule and to model human social systems as "conservative dynamical systems" such that when human molecules collide there exists a conservative nature to the interaction and that both internal and external parameters must be accounted for in a statistical thermodynamic analysis of any human system. [2] Darwin spent the last 15 years of his life musing over these ideas.

C.G. Darwin, in this light, was one of the founders of "history thermodynamics", the thermodynamic study of human history.

Education
C.G. Darwin was said to have inherited mathematical ability from his father G.H. Darwin, a subject he excelled at Marlborough College, where he learned a good deal of Latin, and some history. His mathematics ability won him a scholarship to Trinity College, Cambridge. At Cambridge, he took a course on the theory of sound, based on English physicist John Strutt (Lord Rayleigh)’s book on the subject; a subject which would server his later work. He graduated with a BA in mathematics in 1910.

Following Cambridge, Darwin joined Ernest Rutherford at Victoria University of Manchester as a lecturer in physics, where he lectured on topics such as kinetic theory and thermodynamics. His main work during this period was in the development of the mathematical work of Rutherford’s gold foil alpha particle experiments.

“Charles Galton Darwin, a student of Rutherford, highly gifted as a theoretician and mathematician, of noble academic origin as son of mathematician George Howard Darwin and grandson of the great Charles Darwin, also worked on the theory of diffusion of α particles (Darwin 1914a) contributing in particular to evaluate their slowing down due to the shielding effect of the external electrons of the atoms and proving that gradual energy loss of the α particle travelling through a metallic foil depended on the number of electrons that it encountered on its path (Darwin 1914b).”

On the outbreak of World War I (1914), he joined the Royal Engineers, where he worked on problems in ballistics, and later served in the Royal Flying Corps.

In 1919, Darwin took up a post at Christ’s College, working on X-ray reflections, studying the orbits of electrons in terms of the newly developing quantum theory, and began working with Ralph Fowler in the development of the statistical theory of thermodynamics.

In more detail, following World War I, from 1919 to 1922, he was fellow and lecturer at Christ's College, Cambridge, where he and Ralph Fowler, the founder of the zeroth law of thermodynamics and author one of the first books on statistical thermodynamics (with chemical thermodynamics founder Edward Guggenheim), developed new methods of statistical mechanics, i.e. the Darwin-Fowler method, that later served as a foundation for quantum statistics.

Darwin was elected to the Royal Society in 1922 and became the Tait professor of natural philosophy in 1923 at Edinburgh University, where he ran the department of mathematical physics, and carried on his work in quantum mechanics, worked on quantum optics, and magneto-optic effects. During this period, his early coursework in wave theory enabled him to publish several papers on this topic and the 1931 book The New Conceptions of Matter. He also spent a term working with Niels Bohr in Copenhagen, during the time when the uncertainty principle and the ‘spinning electron’ were discovered.

In 1935, he returned to Cambridge, becoming director of the National Physics Laboratory. [3] He also anticipated some of P.A.M. Dirac's relativistic theory of the electron. He was a professor at Edinburgh from 1924 to 1936 and master of Christ's College from 1936, and directed the National Physical Laboratory during World War II, leaving the post in 1949.

The Next Million Years
In retirement, the last 15 years of his life were devoted to the study of the sociological implications of the population explosion, as reflected in his book The Next Million Years (1952), a sort of family tradition extension of his grandfather's 1859 On the Origin of Species, albeit applying the theory of evolution, mixed with modern physics arguments, towards the future.

The first Introduction chapter, gives an excellent outline of the subject of human thermodynamics, arguing that humans can be modeled as molecules and that statistical thermodynamics methods can be employed to the predictions of human futures.

The latter chapters of the book, however, have become somewhat of a bugbear and controversial in that he gives a prediction that a disaster awaits humankind in the next 500 million years, loosely owing to overpopulation and limited means of sustenance, and argues for aggressive birth control methods.

In the years following publication, he modified his original catastrophe estimate to argue that in the next 50 years humanity will be outstripped of food production. It is said that, to the wider public, The Next Million Years is what C.G. Darwin is best known for. [3]